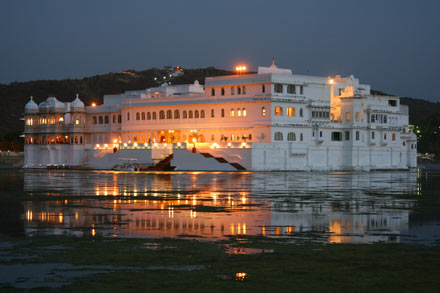 We’ve made our way to the Rajasthani town of Udaipur, home to the world-famous Lake Palace. Bond-aficionados will immediately recognize the name Udaipur as the setting for the 1983 film Octopussy, a spectacular example of 80s Bond kitsch featuring a band of Amazon trapeze artists slash jewel smugglers who help Bond prevent nuclear tragedy. How can you not love a film which culminates with an army of Bond-girls clad in red polyester bodysuits storming Udaipur’s Monsoon Palace by trapeze joined by Bond in a Union Jack hot-air balloon. God, I love it.

Just in case any visitor to Udaipur has forgotten the city’s glamorous Bond associations, a dozen hotels in the old town have nightly showings of Octopussy to help remind you. Actually, it is quite surprising to see how little has changed in the city in 25 years, although the streets aren’t quite as festive as the super-charged Bond version. Remarkably, I think they are still driving the same rickshaws – yikes! 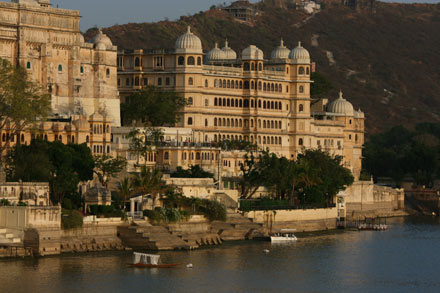 Bond-related attractions abound throughout Udaipur from the accurately depicted Shivniwas Palace Hotel to the wildly reinvented mountain-top Monsoon Palace. (Don’t think you are going to jump out of one of the Monsoon Palace’s windows and come face to face with a tiger.) Of course, the jewel in the crown of Udaipur’s Bondmania is the phenomenally-hyped Lake Palace, secret hideout of the legendary jewel smuggler Octopussy, played by my favorite Bond girl Maude Adams. The Maharaja of Udaipur has in the meantime converted Octopussy’s lair into a world class hotel.

But before you run out to book a night at your favorite Bond hideout, you might want to check out the sky-high rates. A basic room without views of Lake Pichola will set you back $450 dollars a night – ouch. And don’t think you are just going to walk into the hotel for a quick peak; visitors are only allowed if they come for dinner, which ain’t cheap. Obviously, we skipped out on that splurge, even though I’m a real Bond-fan.

One response to “Udaipur – Octopussy Territory”