A walk through the narrow alleys and lanes of Georgetown quickly reveals the incredible diversity of religious institutions that history has woven into the fabric of Penang. It is a sensory exploration of faith. Hindu drums and the Muslim call to prayer reverberate through clouds of Chinese incense and the wafting scent of strands of floral offerings. 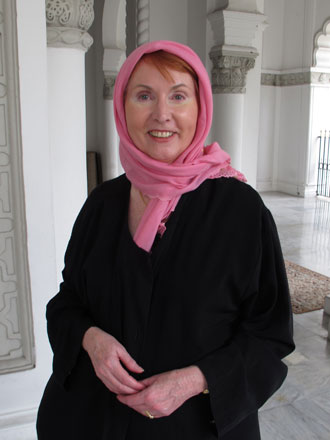 During one of our explorations, we stopped at the Kapitan Keling Mosque. At first, Freda wasn’t quite sure whether she would be allowed in, as many countries do not allow Westerners or Western women to enter. But as we approached the mosque, a friendly Muslim man invited us in. Freda was wearing a short sleeve shirt, so she was given a black robe and a head scarf to cover up. I thought she looked quite glamorous in the Malay clothing. The extremely hospitable man led us around the grounds and answered all of our questions about Islam trying to demystify the religion. We noticed many other helpers similarly escorting visitors around the periphery of the mosque as foreigners were not allowed to enter the central prayer area.

Freda, often called Farida by Malays here, listened intently to his description and asked many questions. But perhaps the most educational aspect of the visit was trying to endure twenty minutes in the layers of clothing that Malay women regularly wear in the 100 degree temperatures. (Let’s just say Farida won’t be converting anytime soon.) 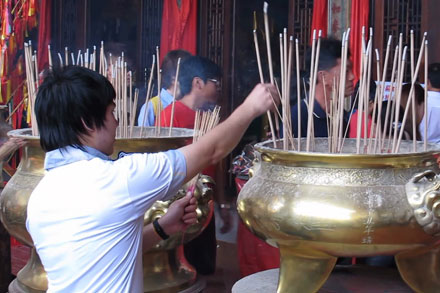 Some travelers have reservations when it comes to visiting religious places. “I respect religion too much to just walk into a temple or mosque uninvited,” comments Olaf, a fellow German traveler staying at our hotel. I understand his apprehension, I remember my own discomfort with visiting places of worship early on in our travels. Did I have to take my shoes off? Did I have to cover my head? Could I take photos? Did I have to remove my hat? 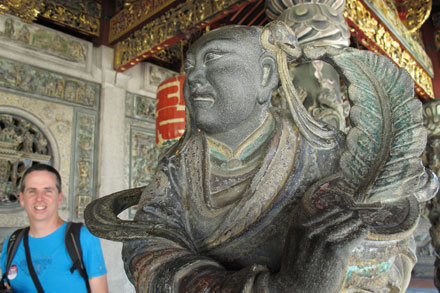 Fortunately, Penang seems particularly welcoming when it comes to religious institutions. And there are MANY! It has to be one of the most religiously diverse regions anywhere in Southeast Asia. Georgetown alone offers up Protestant and Catholic Christian churches, Tamil-style Hindu temples, a Krishna temple, Sikh gurdwaras, a variety of beautiful mosques, a Sufi shrine, traditional Chinese temples and ancestral clanhouses as well as Burmese, Thai and Tibetan Buddhist temples – it’s like a world tour in a single town. It would be a shame to let this opportunity pass because you didn’t want to impose. 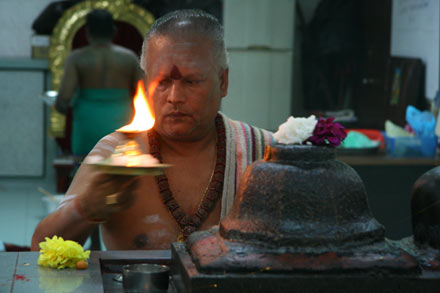 Experience has taught me that most religious groups are happy to show you around and talk about their faiths. Often, there are signs posted at the entrance describing what is expected of visitors. Just be respectful and polite as you would in your own house of worship. And if you are, you might even witness some amazing ceremonies. We were fortunate enough to see two Hindu priests performing a ritual at the colorful Sri Mariamman Temple. Unlike some Hindu temples in India, which are often closed to non-Hindus, Indian temples in Penang seem to be open to all visitors.

So, take a leap of faith and step in the front door, it’s really worth it!

One response to “Leap of Faith”