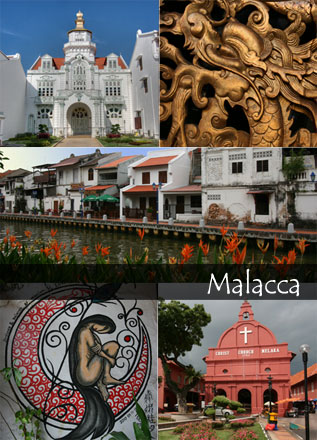 A rather big name from the standpoint of colonial history, little Malacca is actually far smaller than its less known brother Penang. Despite its diminutive size, the little town has a long history and a certain flair derived from its time as the colonial hot potato that bounced from Malay to Portuguese to Dutch to British hands.

There is definitely some impressive, if somewhat subtle, history here. A nice waterfront promenade, the Portuguese ruins on the hill, a selection of Chinese clan houses and the salmon-pink Dutch architecture around the town square create a nice atmosphere in which to spend a couple of days. 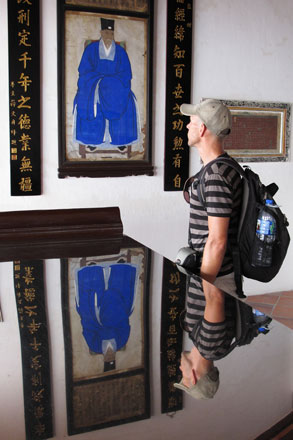 For us, the highlight was certainly the food. We sampled a range of dishes including Malacca’s famous Nyonya, Chinese, and Indian cuisines as well as Portuguese inspired dishes. Our favorites included Nyonya laksa, some amazing mango prawns, Assam pedas, and dim sum at Low Yong Mow.

Because of its historical importance, the old city of Malacca has been declared a UNESCO World Heritage Site. While we did enjoy Malacca, it is important to note that poor tourist development has noticeably marred the city. Disproportionately large hotels detract from the subtle beauty of the river area and the stupid Disneyland-style Menara Taming Sari viewing tower is beyond explanation. What knucklehead came up with that monstrosity? The old town also desperately needs to be pedestrianized – although that’s probably a long shot here in Asia.

But if you put your blinders on, Malacca is a wonderful place to stroll around, sample a variety of foods, and hang out in a relaxing coffee shop people watching as the world strolls by.