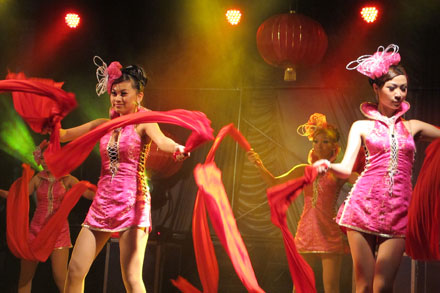 Most Chinese, including Ken’s family which is Toishan, celebrate the New Year on the first day of the lunar calendar. But Hokkien Chinese choose to celebrate on the ninth day. The large Hokkien community here in Penang makes sure their presence and their traditions are remembered with raucous celebrations including pleasingly cheesy dance shows, a barrage of firecrackers, and city-wide fireworks displays. The festivities center around the Chew Jetty, a jetty of stilt-houses belonging to the Hokkien Chew clan. 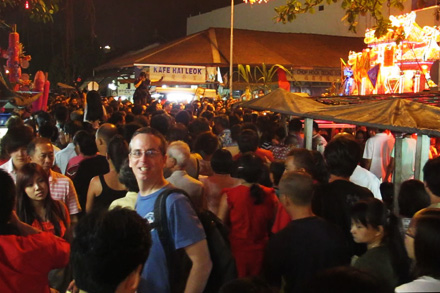 This unique Hokkien tradition of celebrating on the ninth day goes back to a period in China when an enemy army was determined to wipe out the Hokkien people. As the army massacred the Hokkien, survivors took refuge in fields of sugarcane. Divine intervention caused the army to leave ending the bloodshed. The Hokkien emerged from the sugarcane fields on the ninth day of the New Year, which coincided with the birthday of the Jade Emperor of Heaven (Thni Kong Seh). For this reason, the Hokkien people celebrate on the ninth day and show their thanks to the Jade Emperor by making generous offerings. And when I say generous, I mean it. We saw people carrying whole roast pigs, plates of crabs, and crates of fruit!!! 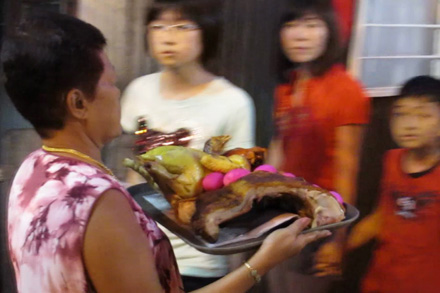 They also mark their emergence from the sugarcane fields in different ways. When Ken was a child, he remembers Hokkien people in his home village of Bagan Dalam constructing small arches out of sugarcane stalks. Each member of the family would walk through the arch symbolically emerging from the fields before beginning the celebrations. 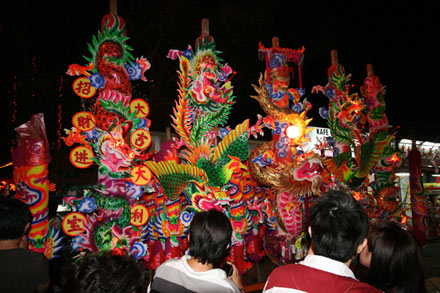 Here in Georgetown, we witnessed another ritual. Families made elaborate altars in front of their homes featuring impressive offerings of food, gigantic painted Joss sticks, and stalks of sugarcane. Just after midnight on the eighth day of New Year, the families made additional piles of Thni Kong Kim, folded pieces of gold paper. The large piles of Thni Kong Kim were set ablaze and the family members took the stalks of sugarcane from the altars, broke them into pieces, and threw them into the flames. All around firecrackers and fireworks marked the beginning of the ninth day and the survival of the Hokkien people. 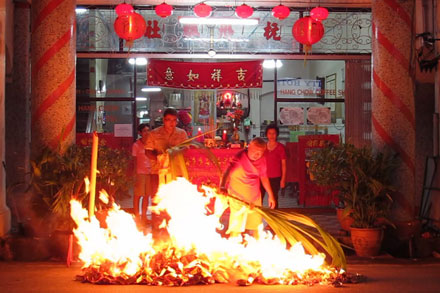 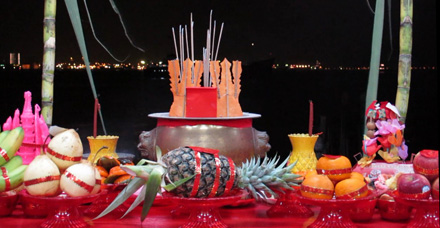