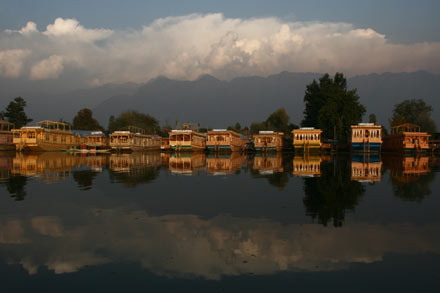 Those of you who recognize the name Kashmir may be asking yourselves, “Why the hell would Tony and Thomas risk going to one of the world’s most volatile regions? Are they insane?”

True, Kashmir has been a hotspot for the last two decades and has built quite a reputation for itself. The only predominately Muslim region to stay behind when India and Pakistan split, Kashmir has been the main source of tension between the two countries ever since. In 2000, President Clinton declared Kashmir “the most dangerous place in the world.” Not really a shining recommendation to visit the area.

What many of you may not know is that Kashmir is legendary throughout India as being “heaven on earth.” Famous for its spectacular waterscape, palatial houseboats, soaring pine-covered peaks, fabulous Mughal gardens, unique Islamic architecture, tasty food and refined culture, there is much more to Kashmir than violence. It is an extraordinary blend of Central Asia and the Himalayas that we simply could not pass up.

But the decision to go to Kashmir was not an easy one. For the last three years, Kashmir has been relatively peaceful and the tourists, especially Indian tourists, were starting to flood back into the region. However, in June of this year, tensions restarted over a rather complicated land transfer that sparked tensions between Muslims and Hindus and is threatening to collapse the relative stability that was starting to return to the region.

We researched Kashmir extensively while in Leh and talked to many Kashmiri shop owners there before making our decision to travel to the capital, Srinagar. In addition, both French Thomas and Emma and Richard passed through Srinagar shortly before us. They emailed us raving about the region and insisted it shouldn’t be missed. After much deliberation, we decided to go for it.