Like all cities in India, Calcutta is plagued with power outages. Sometimes there are two a day, sometimes there are ten. Having invested in a rather expensive air-conditioned room, these outages are especially annoying. However, after a year in India, we view them as just another daily annoyance. 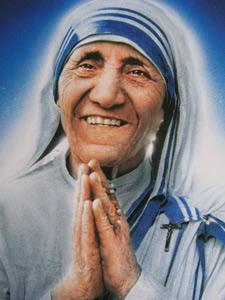 Escaping our room during one of the outages, we decided to visit Mother House. Simply known as “Mother” in Calcutta, Mother Teresa is revered as a soon-to-be saint by Christians and a demi-god by Hindus. She is synonymous with Calcutta, and people of all religions love her here.

Although I am no great fan of organized religion, and I am quite aware of the controversy surrounding many of Mother Teresa’s beliefs, including her strict opposition to contraception, I nevertheless believe that her extraordinary work in the slums of Calcutta merits the requisite pilgrimage to Mother House. Could any visit to Calcutta be complete without it?

And the trip was very much worth it. The simple, soft-spoken nuns donning the easily recognizable blue and white saris made famous by Mother Teresa were incredibly inviting, especially considering the fact that they must have hundreds of tourist dropping by each day. I was massively impressed by Mother Teresa’s simple tomb; it spoke volumes about the sincerity of her beliefs. And the small museum dedicated to her life was absolutely fascinating. I was intrigued by wording which appeared to subtly critique the opulence of the church in a world with such poverty. Even in death, Mother Teresa seems to be making a clear statement.

But perhaps the most fascinating fact appeared towards the end of the museum. On the night Mother Teresa died, she was experiencing heart problems and a doctor was called in to attend to her. As Mother Teresa lie struggling in her bed, the doctor wanted to administer life-saving measures, but couldn’t. Why? Because there was a power outage.