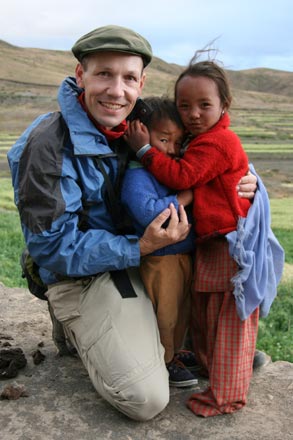 After a number of day hikes with Amit, Ariel and Yael, we were ready for more of a challenge and decided to do a 4-day homestay trek along the northern edge of the Spiti Valley. In addition to taking in the phenomenal scenery, we would be able to explore the fascinating Spitian culture by living with local families. We knew this would come with certain inconveniences, but all of us were willing to trade a private bathroom (as it turned out pretty much any bathroom) for some cultural exchange.

Most of the houses we stayed in were huge white-washed adobe structures with small windows and thick walls to reduce heat loss. Two to three stories high, the roofs were stacked with drying hay and the lower story was often used as an animal shelter or for storage. The few rooms on the main family floor, usually centered around the kitchen, were large social areas sometimes shared by up to 15 family members (representing up to four generations) as well as a number of pets. 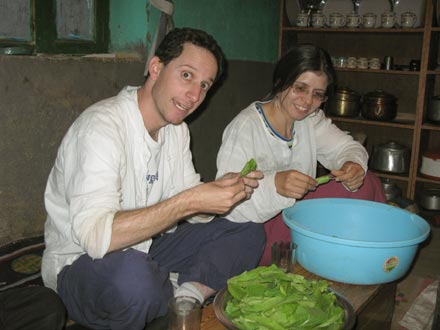 One thing we learned while staying with the locals is that there’s no room for privacy – not even in the drop toilet located inside the house. One day, while I was performing some acrobatic squat/splits and desperately trying to keep my balance, I could hear a deep breathing from behind the curtain covering the tiny window. Eager to catch the peeping Tom watching the peeing Tom, I drew the curtain back only to discover two bulging cow eyes with long, curved eyelashes staring at me from the attached corral.

Most of our time with the families was spent sitting on carpet-covered mattresses in the kitchen, which doubled as a living room as well as family bedroom. We chatted with the families as best we could and helped prepare the meals which usually consisted of lentils, curried vegetables or a traditional Tibetan noodle soup called thukpa. (Actually, it was more the Israelis helping prepare the food, while the German and American sat back and sipped chai. Too many cooks…)

From our point of view, it was fascinating and a little frightening to watch grandma pile dried yak dung into the stove, then turn around to knead the dough for making chapatis. There wasn’t even an attempt to sanitize her hands between those two very unrelated actions – oh well, just go with the flow. 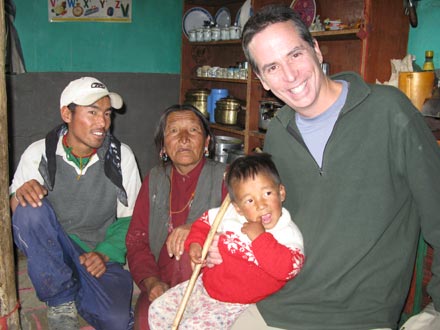 I think it’s the many differences that make another culture so appealing, and during our homestays we experienced plenty of those. Of course the mountain desert scenery was spectacular, but staying with the local families, playing with their kids, and finding out about their traditions was the absolute highlight for me during our trek. I came out completely energized and I’m already looking forward to doing another homestay trek in the near future. And all these great experiences for only $5 a day including bed and meals and a whole lot of hospitality – not bad.