Day Trip to the Hermit Monk 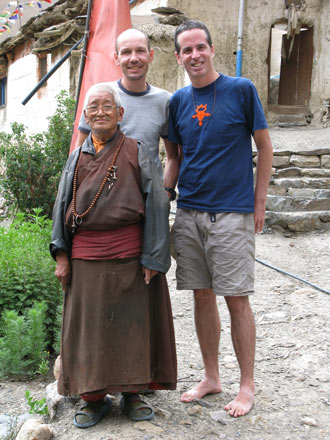 While staying in Tabo, we heard rumors of a hermit Buddhist monk living up one of the side valleys in a small cave temple. Intrigued by such a figure, our small band of rag-tag explorers couldn’t pass up the opportunity to pay the monk a visit.

Thomas, Ariel, Amit, Yael and I joined by our new friend Craig from Scotland made our way up through the dramatically eroded valley along extremely narrow, crumbling paths looking for the hermit. We didn’t know what a “cave temple” looked like or how obvious is might be in the surrounding cliffs, so we took our time.

As we were slowly taking in the valley around us, a lone British hiker happened by. She informed us that the hermit monk did not like visitors and discouraged outsiders from entering his cave temple. Suddenly realizing that the hermit monk was probably a hermit for a reason, we decided to continue hiking up the valley to take in the scenery, but leave the poor guy in peace.

Eventually, we discovered a small collection of ruined dwellings with a single mud building intact – abode of the hermit. We hiked past the area looking for the trail leading further up the valley. Confused by a series of stone chortens backed by a steep drop into the river below, we were milling around searching for a path when we spotted an ancient figure beckoning to us from the white-washed mud structure. Unsure as to whether we were being invited in or asked to leave, we approached cautiously smiling and uttering the Spitian greeting “Jullay, jullay!”

Once closer, we noticed the tiny monk was smiling and inviting us in for a visit. We crawled into his small mud-walled kitchen and he immediately started preparing glasses of chai for us. Sitting on a faded carpet in the tiny kitchen watching the tiny monk making the tea, I had the weirdest sense that we were visiting Yoda. Smiling, the jovial little guy even pulled out a tin of stale cookies, clearly a treat saved for visitors. Touched by the monk’s hospitality, Ariel offered him a boiled egg which he happily gobbled down with his tsampa. We communicated with a few words of English, a few words of Hindi, a few words of Tibetan, and a lot of sign language.

Our visit turned out to be a wonderful experience, and the monk, who was a refugee from the Guge Kingdom in Tibet, was extremely hospitable and welcoming. We did our best to convey that we had visited the Guge Kingdom last year. It was bizarre to realize that this old man had trained and lived in the spectacular Indo-Tibetan monasteries of Guge that were destroyed by the Chinese during the invasion, that what had appeared to us as ancient, neglected ruins had been a real part of this man’s earlier life. He was a living piece of history seeking out an existence in an isolated Himalayan canyon.

After drinking our chai and nibbling on the stale cookies, he showed us around his little living area and led us to a tiny cave filled with several Buddhist shrines. The hermit monk did not ask for anything, but we gave him some money to help him buy supplies and left fresh cookies that we had brought with us for the next visitors. Why the British hiker believed the monk to be hostile to outsiders, I don’t know. Towards us, he was the classic example of Tibetan hospitality.

5 responses to “Day Trip to the Hermit Monk”

Gardens by the Bay in Singapore is a spectacular p

Thomas floating in the pool at Riad les Yeux Bleus