One of the major reasons we came to the Andamans was to scuba dive. We had been waiting for this moment since we arrived in India. Unfortunately, the day before we left Chennai to fly to the islands, a doctor declared Thomas unable to dive because of a serious sinus/inner-ear infection. Major bummer!

So I was left on my own to explore the sensational underwater world of the Andaman Sea. Dumb luck led me to Barefoot Scuba, Havelock Island’s only 5-star PADI diving center – and a stroke of luck it was. 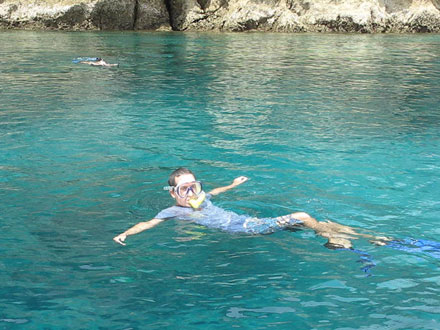 Shawn, the Norwegian running the center, went out of his way to help me put together a package of 10 different dives allowing me to experience a cross section of the islands diving opportunities. He and the friendly staff made sure that I always had somebody to dive with, a task made more difficult by the fact that I wanted to dive several sites that required advanced certification.

So, how was it? Spectacular.

Havelock and the surrounding islands were also experiencing an unusual jellyfish bloom, they were everywhere. (Such extraordinary blooms are predicted to increase as a result of global warming.) On one memorable decent through exceptionally clear water, we swam down through literally millions of grapefruit-sized jellyfish. Little purple undulating critters as far as the eye could see on all sides, above us, below us, everywhere. Simply breathtaking. (Anyone out there remember the jellyfish scene in the movie “Sphere”?)

But there was one serious downer! It seems good ol’ Tony and his dive partners were a little too fixated on one particular sea turtle. When we resurfaced and climbed on to the boat, the other members of our dive group were in a fit of hysteria over a 12ft (4m) manta ray that apparently swam over us while we were checking out the turtle. Oh the tragedy!!! How can a 12-foot monster swim over you, and you don’t even notice it???

Despite missing the manta ray, the dives were fantastic. And don’t worry about Thomas. He was able to get a taste of the big blue by snorkeling around South Button seamount. I even joined him on a break between dives because I couldn’t get enough.

For more info on diving with Barefoot Scuba, check out their web site at diveandamans.com.

One response to “Diving the Andamans”