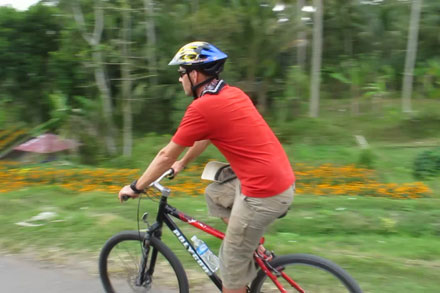 “What do you mean a bicycle tour? Leave the villa and the pool?” I screeched in hysteria. I was in one of my lazy moods. “It’s time to wean you off this luxury,” Tony replied mockingly as he continued packing for the trip to Ubud, the place where Elizabeth Gilbert found love in Eat, Pray, Love. The thought of leaving didn’t seem so lovely right now. Clearly, I was addicted to our Bali surf villa. As our guides from Banyan Tree Bike Tours picked us up, I was still feeling hesitant. But the promise of food quickly snapped me out of it.

Our two-hour bicycle trip through the scenic heartland of Bali started with an extremely enjoyable breakfast overlooking the terraced slopes of Mount Batukaru. I was the first to order.

“Pancakes or eggs?”, the young woman asked with a smile. “I’ll have both,” I blurted out ignoring the “or” completely. The table suddenly listened up, and when the smile on the waitress’ face didn’t fade, everyone quickly followed suit and went for both. 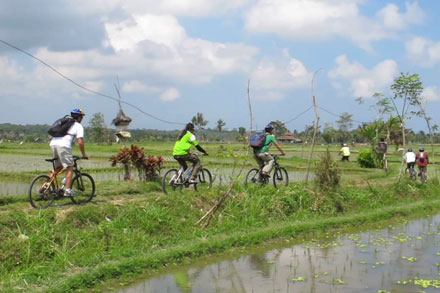 After the eating finished, it was time to play. Fitted with aerodynamic helmets, our small group set out along the meandering roads dodging potholes as we went. Cleverly organized, with lots of flat and downhill stretches, the tour passed by agricultural areas, small villages, fields of colorful flowers as well as impressive Hindu temples and small altars attached to traditional houses. 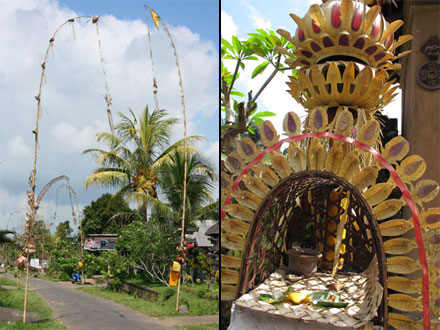 Religion plays a big role in Bali, which was evident by the religious paraphernalia along the route. Penjor, long decorated bamboo poles used during festivals, were placed every 100 yards along the narrow roads dangling over us like oversized fishing poles. In front of almost every house were two or three little woven trays on the ground with flowers, sugar or cookies to keep away the demons. Offerings of incense and fruit were made in beautifully decorated shrines which were shaped like American mailboxes. In one village, two giant statues wrapped in white and golden fabric greeted visitors as they rolled through. 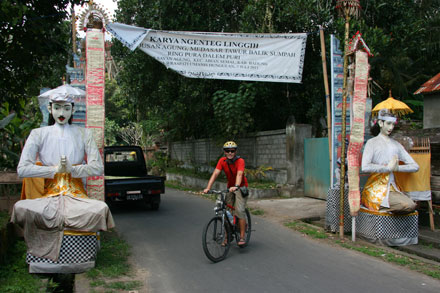 A highlight was stopping to tour a traditional Balinese house. The impressively large compound included an outdoor kitchen, an altar and an extensive fruit and vegetable garden. Everything they grew seemed to provide the makings for a delicious dessert: cocoa, nutmeg, coffee, vanilla, cinnamon, and cloves. If it sounds like I am obsessed with food, I am.

After working the pedals hard, pushing the bikes and cursing silently, we made our way into an amazing series of rice paddies and terraced fields. Some of the rugged paths running along the flooded parcels were barely wider than the bicycle tires, so balance was crucial. I’m sure all the locals in the fields had bets going on which wobbly foreigner would make it and which would fail. Luckily, against all odds, the six of us made it without taking the plunge. 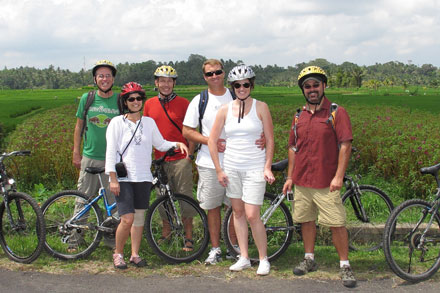 Two hours of burning calories finally ended in a delicious lunch buffet at the tour operator’s house in Ubud. They even added a dose of humor by bringing some durian to the table so everyone could try the stinky fruit, which Tony describes as having the odor of gym socks and rotten onions. Although most foreigners hate the notorious fruit, I had the last laugh because I actually like it – I even asked for seconds and thirds. 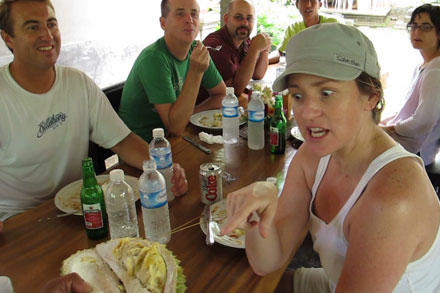 Clearly, a little tough love paid off in the end. If Tony hadn’t made me break away from the villa, I would have missed an incredible bike tour – and an even better Balinese buffet. Of course, he then suggested I be banned from the villa because I reeked of durian!!!