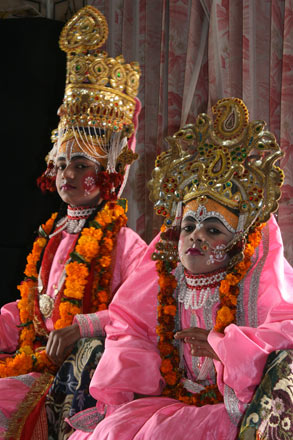 When you walk into a Hindu temple, you never know what the people will be worshipping inside. It might be a stone lingam or perhaps what looks like a silver Barbie Doll dressed up in her Gone with the Wind ball gown. It might be cows, monkeys or rats. Perhaps the people are praying to a spot on the ground where Sati’s left breast landed after she was consumed by flames in the heavens. Or, possibly, it’s where her nose landed. You never know.

This time, when we entered the Hindu Silver Temple in Amritsar, it was two young Nepali boys. Bizarre. People played music and left offerings at their feet as the two children, looking quite god-like yet bored, sat rigidly staring off into space.

One very friendly and highly devoted temple visitor ran up to us and actively encouraged us to slide up front and photograph the god-children. “Go ahead, take photos, they will love them!” he ensured us as he forceably pushed me to the front of the crowd of musicians and worshippers.

Feeling quite awkward and highly obvious as I snapped away, I noticed the god-children cracking smiles as they subtly stole glances at my camera lens.

Quite embarrassed, I held out the camera so they could see their photos. Several women at the the front of the crowd looked quite annoyed at my presence, but it was worth it. For one second, the god-act faltered and two normal children smiled with excitement at their pictures on the digital display. But the moment was short lived, within seconds they had recomposed themselves and the god children were back.

To thank me, the boy with the tall headdress placed a long necklace of flowers around my neck. According to the devoted temple visitor who had pushed us up to the front of the crowd, this was quite a fortuitous blessing. 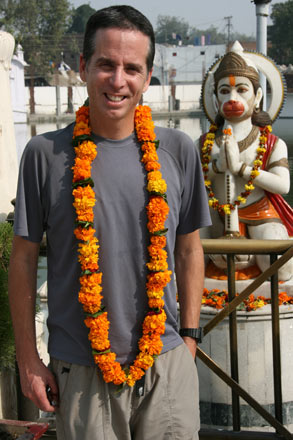