From Cambodia to Laos 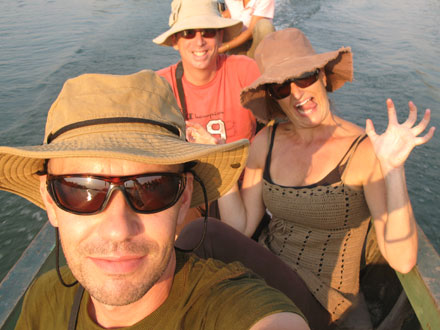 If we had any hope that Laos would be less corrupt, it didn’t last long. Laotian border guards demanded mystery stamp fees of $1 per person. It’s not much, but after the $55 inflated we-hate-Americans visa fee, I was mad. This time though, it was Thomas who lost his cool. I interrupted his tirade on corruption to remind him that the guards would cut our visa length in half if he pissed them off. We payed the small bribe and slipped across the border with our tails between our legs. Sometimes, you’ve got no choice. But their smug, power-tripping smirks made it REALLY hard for both of us to give in.

Traveling in the third world means you have to get over such annoyances as quickly as possible. Away from the borders, Cambodians are incredibly friendly and very hospitable. Hopefully, Laos will prove equally enjoyable. So as we zoom off into the sunset in our pimped out Laotian jet boat on our way to the Mekong’s Si Phan Don (4000 Islands), there’s hope in our eyes as we anxiously begin our next set of adventures. Well, there’s hope in Thomas’ and my eyes. I don’t know what’s going on with Beverly’s face.

2 responses to “From Cambodia to Laos”