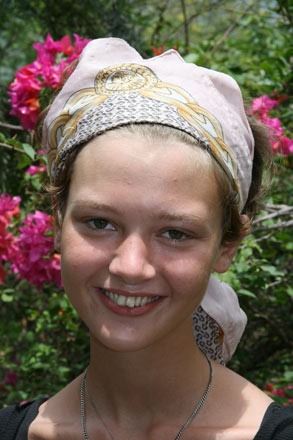 She’s cute, she’s all smiles, and she’s named after a flower, but make no mistake about it, Daisy is a true adventuress in the making. While many other Brits are content to spend the gap-year on a safer, pre-packaged outing, Daisy would have none of that.

At the incredible age of 19, Daisy is challenging herself with an exciting overland Eurasian Odyssey taking her from Moscow to India via the trans-Mongolian railway. Shunning convention, Daisy crossed Siberia and Mongolia mid-winter seriously adding to the adventure. (How many of you out there have camped in a Mongolian ger in February? Yikes!!!)

Initially intending to take the overland route across Tibet to Nepal as we did, Daisy had the dubious distinction of attempting to enter Tibet just as the riots broke out in March. Caught in China during a period of extreme censorship, Daisy told us that it was quite difficult for her to determine what was going on from within the country. All news sites reporting on Tibet were blocked, and even personal Internet usage was being seriously monitored.

Daisy described trying to update her Facebook account with a message including the word “Lhasa”. Detecting the forbidden term, the message was blocked and Daisy was locked out from accessing Facebookat all – she was no longer even able to view her own account, let alone make a posting. Not only was the web being censored, suddenly Skype calls out of China were blocked as well.

After finally learning about the riots through landline telephone calls to her mother, Daisy made the decision to leave China and reroute her adventure through Southeast Asia. This wasn’t an easy decision for her. Not only is Daisy anti-flying environmentalist at heart, she also loves trains, and her goal of traveling to India overland was difficult to abandon.

The decision to head south had the unexpected consequence of taking Daisy to Vietnam, which ended up being her favorite country. She spent a month traveling across the country before flying to Nepal via Bangladesh. From Nepal she traveled overland to India, where we met her in Rishikesh.

Daisy is one of the most sensible, clear-thinking travelers I’ve met. She speaks with the confidence and perspective of someone who has been traveling for decades dealing with cultural issues with ease. Beyond that she faced the difficulty of traveling as a single female head on while embracing the resulting challenges. (All at the amazing age of 19!)

Don’t think Daisy a reckless fool in search of danger, she could teach classes on defensive traveling having mastered the difficult balance between protecting herself while being receptive enough to allow for positive exchanges with the hospitable people she has met along the way. Her bit of advice is to protect yourself first and go with your instincts on people. Her instincts seemed to be serving her quite well.

On her next adventure, Daisy intends to buy a one-way ticket to some exotic location and travel completely spontaneously from there with no set schedule. Good luck Daisy, I’m sure we’ll cross paths again at some point.