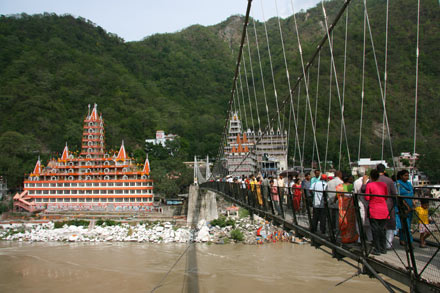 Rishikesh, ancient spiritual center and pilgrimage site for Hindus, was put on the map with the arrival of the Beatles at the Maharishi Mahesh Yogi Ashram in the late 1960s. Since then, Rishikesh has been declared the yoga capital of the world with numerous yoga and meditation ashrams along the banks of the Ganges. In between Ayurvedic tea and Ayurvedic massages, Rishikesh is all about self-realization, yogic asanas, white-water rafting and crystal healing – very New Age and quite different from other places we’ve visited in India.

Sounds like a place to hang out for a while, doesn’t it? Well, I totally agree – at least in theory. I’ve just recently seen a Discovery Channel documentary on Lakshman Jhula, the pilgrim center north of Rishikesh, and it looked so beautiful and mystical. Only after walking there from our quiet hotel and spending some time around town did I realize what a true artist (read con-artist) the film editor was. A note to those who have seen the same documentary, don’t expect traditional temples, otters, and elephants along a blue-green river.

Certainly, Rishikesh is beautiful in its own way, but it’s a madhouse – completely manic. As we made our way down a narrow path with views of shopping-center style, concrete temples toward the suspension bridge leading into Lakshman Jhula, we passed a leprosy colony, mountains of trash, long rows of beggars and a snake charmer desperately trying to keep control over his cobra. But the biggest challenge we met was trying to cross the pedestrian bridge across the mud-colored Ganges.

Pedestrian? I don’t think so. Honking motorcycles, holy cows, ringing bicycles and aggressive monkeys add some excitement and make the crossing quite tricky. You never know which obstacle you come across next. Maybe they should have called it a suspense-tion bridge instead. 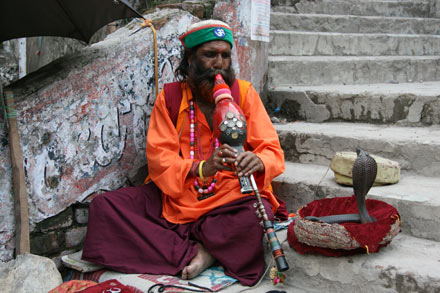 All stressed out and exhausted, we finally made it back to our hotel. Now, I completely understand the need for so many meditation and yoga centers. How else can you stay sane and focus on your holistic health in such an environment?