Visitors to Kerala tend to notice two things (other than coconuts) which occur here in abundance and set the state apart from the rest of India. These would be Communists and Christians. 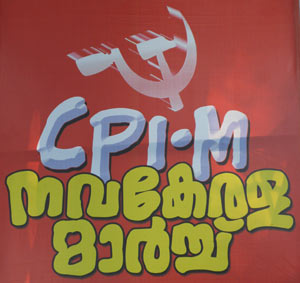 Now generally, in most of the world, Jesus doesn’t tend to be surrounded with hammers and sickles. Dare I say Communists and Christians haven’t had the best relationship historically? But not so in Kerala. And don’t mistakenly think that Kerala is some sad latecomer to either belief system.

This beautiful tropical state has the unique distinction of being the first place in the world to democratically elect a Communist government into office in 1957. And Christianity is believed to have arrived in Kerala with the arrival of St. Thomas the Apostle who happened on to southern India’s shores in the first century AD.

So what impact have these two ideologies had on Kerala. Well, the land of coconuts has a 90+% literacy rate, higher than any developing country in the world. At an average of 73, life expectancy is ten years higher than the rest of India. If that weren’t impressive enough, infant mortality is said to be one-fifth of India’s national average. Daily life here is clearly a step ahead of the rest of the country.

But it’s not all good news. Either Lenin or Jesus seems to have had some negative impact on this part of the world as well. Kerala’s suicide rate is the highest in India! And liquor consumption is well beyond the rest of the country. Hmmm, could Lenin turn water into wine?