After two enjoyable weeks in Kathmandu, we were recharged and ready to face India for another 6 months. A couple of days before leaving, we started to entertain the idea of returning to Delhi by a solid 2-day bus/jeep/train combination. However, we soon found out that bus services to the border had been canceled due to a serious fuel shortage (a result of the rising oil prices), and major flooding in the Kathmandu Valley caused by the monsoon rains. 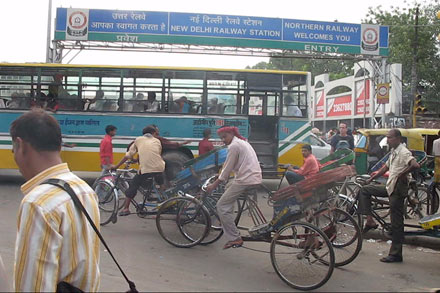 To be honest, if we had waited for a few days, things probably would’ve returned to normal, but we’ve gotten weak. We were on such a Nepal rush and just couldn’t face another overland border crossing. So we opted to fly back to India.

Last minute tickets with Jet Lite were quickly located ($145 incl. departure tax) and off we went, sad though we were to leave Kathmandu. The flight went reasonably well, and we were even served vegetable curry and chapatis on the 90-minute flight.

About half way through, Tony happily changed seats with an Indian man sitting next to me on the aisle seat. Endless requests for us to take photos with his camera and repeatedly leaning over my lap into my food to see the view finally made it clear that this was the man’s first flight. He wasn’t alone. A series of elbows batting me in the head alerted me to his friends seated behind us, giddy and giggling and juggling seats to peak out into the clouds. All very understandable.

Once in Delhi, we prepaid a taxi (this normally ensures that you don’t get ripped off) and headed off toward our hotel near the New Delhi train station. As soon as we left the taxi stand, however, some official-looking Indian taxi-mooch waved down our taxi and was about to get in for a free ride in to the city, assuming that we would be overwhelmed by his “officialness” and just let him ride along. Oh, India. Pumped up on 6 months of India experience, we both immediately yelled “Get out!” and the surprised looking official fled the vehicle. Ah, that felt good. I can’t believe the fast transformation – it didn’t take very long to put us back in India mode.