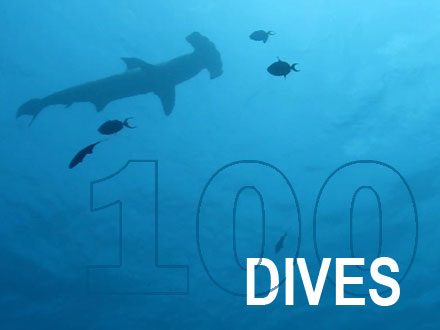 Nope, we didn’t come here to find a hammerhead; that’s just some serious icing on the scuba cake in the lead up to what just might be the best 100th dive ever.

When we arrived here on Nusa Lembongan, I had 94 dives under my weight belt. Plunging into the shockingly icy currents for my 95th dive, I had my blue fingers crossed hoping to see one of the rarest and most bizarre underwater animals around. Adrenaline pumping, it was hard to focus on the stunning coral formations that still survive here in the protectively chilly waters. (Nusa Lembongan has largely been spared from the destructive hot water currents that have devastated coral growth in much of Southeast Asia.)

Heading out along the coral encrusted slopes of Crystal Bay, my Swiss dive guide Debbie suddenly screamed in surprise and manically started pointing towards the surface flailing and gesticulating wildly. My heart leapt with expectation as I looked up to discover… a hammerhead swimming directly over us. What? A hammerhead? That’s not what we were looking for. My otherwise rather stoic guide was ecstatic with delight at what was clearly a very rare sighting.

Rare indeed. Over the next two days, dive masters and instructors around the island would comment, “Oh my god, you guys saw the hammerhead with Debbie. You’re so lucky!!!” And yet, ungratefully, I bemoaned the fact that we had not spotted the phenomenal creature that we had come to the island to find.

And so we dove on, 96th dive and 97th dive were simply perfect. Frogfish, leaffish, octopus, turtles… but I was still eying the open water hoping against the odds for the beast from below. 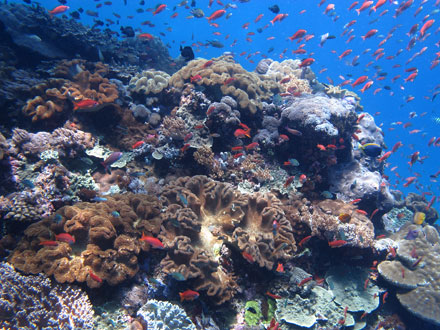 My 98th dive, a thrilling high-speed drift dive from Mangrove to Blue Corner, felt like Thomas and I were playing the lead characters in an underwater version of the Matrix. Giant barracuda, several elegant eagle rays, as well as a number of sea turtles. But the elusive creature never appeared and, on one of the best dives of my life, I still felt a tiny sense of disappointment.

My 99th dive was proof of just how fixated I had become. I had mantas swirling around my head for thirty minutes – and, somehow, I kept checking behind me to make sure I wasn’t missing something “better.” As I climbed out of the water on that dive of dives, I think I suddenly realize how absurdly over-focused I had become. Perhaps, that was when the dive gods decided to reward me.

An hour later, I sat on the edge of the boat preparing for my 100th dive. Our guides Maria and Nick insisted that tradition dictates that the 100th dive must be done naked. No way in hell was I considering that tradition in these ICY waters. And so off we went, my third dive in Crystal Bay, once again out along that increasingly familiar coral encrusted slope hoping to spot – and THERE IT WAS hovering before us… 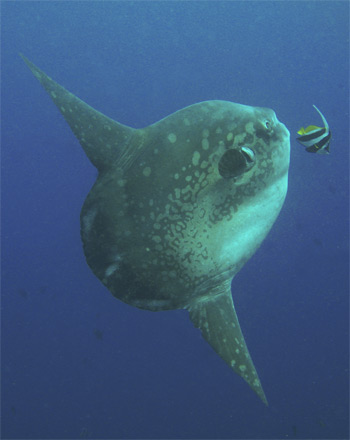 … a sunfish, known locally as the mola mola, one of the most impressive underwater animals in existence. Around 8 feet from head to tail and 13 feet from top fin to bottom fin, the underwater alien is truly one of the planet’s most bizarre animals. And a few feet further, a second sunfish. My heart nearly stopped, I was so excited. The two fish gazed at an angle up towards the surface serenely floating in the open blue. And then, for no apparent reason, the two fish whipped their massive vertical fins and shot into the open ocean like two starships making the jump into hyperspace. It was an unbelievable moment.

Because they are deep-sea animals which surface unpredictably, viewing a sunfish is normally the scuba diving equivalent of winning the lottery. But the uniquely steep geography of Nusa Lembongan as well as neighboring Nusa Cenigan and Nusa Penida create the perfect environment for deep-sea fish to surface near land (which also explains our lucky encounter with the hammerhead). Between late August and October, when currents are coldest, sunfish often surface around these three islands’ coral slopes where they can be cleaned by schools of bannerfish. I truly believed this rare encounter with two sunfish was one of the most impressive things I would ever witness – but I was wrong, the dive gods were not done with me yet.

Hyped on my mola mola encounter, I decided to dive again the next day. (Unfortunately, Thomas stayed behind.) The currents were perfect for my 101st dive, a slow drift through the miraculous coral bommies at Toyapakah. Satisfied after the previous day’s sunfish encounter, I was able to focus my attention on a rainbow of hard and soft coral growth. We took our time checking out small caves and cracks and my dive guide Nick found a wobbegong, a flat shark species with a strange head and elaborate markings.

The Toyapakah dive was packaged with another dive at Crystal Bay, my forth. I dove with two Germans and a Frenchman who were desperately hoping to spot a sunfish, unfortunately the currents were quite strong and we had to grab onto the rocky reef out at the cleaning station for fear of being swept out into the open ocean. To give them a chance to see something, we held on to our rocks flapping around like flags in a hurricane, but nothing chose to swim by, so we gave up and began to fight our way back through the currents to a shallower area up on the slope where we could work our way back to the boat.

I had already swum through the shallow coral area on three previous occasions and that portion of the dive had always been about looking for things hiding in the rocks and coral. But after closely examining some anemone shrimp, I looked up to discover a sunfish suddenly hovering right in front of me – but, bizarrely, Nick and the Germans were looking the other direction. I grunted and hollered manically trying to get their attention but nobody noticed me. My French dive buddy gestured behind me and I turned to discover a second, massive sunfish just feet behind us slowly swimming into our group. The giant animal slowly drifted by, its tiny eye staring at us curiously. In a mere 8m (24ft) of water, its impressive vertical fins waved in gentle unison carefully avoiding coral bommies and us; it was like Picasso’s vision of a monstrous mutant ballet dancer. Literally breathtaking, I barely exhaled (a diving no-no) as the two giants hovered around me; I was afraid that the bubbles would scare the mammoth fish away. And then, like a dream that ends too early, the two fish swept over the slope and disappeared into the colder currents of the open ocean.

It was yet a second winning lottery ticket.

Clearly, in Nusa Lembongan, the numbers are somewhat in your favor, but the winning encounters with the sunfish feel just as momentous.

More Info on Diving in the Area

Prime time for viewing the incredible sunfish is between August and October with September being the peak month. Sightings may begin earlier or later depending on shifting water temperatures. Generally, the colder, the better. During warm-water years, especially when El Nino conditions are occurring, sightings may be rarer.

While Nusa Lembongan is currently considered the best location in the world to view the legendary mola mola, sightings are not guaranteed. There seem to be differing opinions on which dive site is best for spotting the sunfish. The most famous and most heavily visited site for viewing them is Crystal Bay, which is why I did four dives there. After around 10 AM, Crystal bay can be overwhelmed with day-trip dive boats from Bali, although I have to admit I rarely felt that crowded under water. Crystal Bay also has exceptional visibility which makes it easier to spot sunfish out in the open water.

Some dive guides suggest that sunfish sightings along the north coast of Nusa Lembongan and Nusa Penida are equally good. They suggest that anecdotal evidence that Crystal Bay is the best site is largely due to the fact that there are more divers there. If you have more divers, you will spot the rare fish more frequently. Having said that, there is just something about the topography of Crystal Bay and the clarity of its waters which feels like a better place to find the mola mola. (But what do I know?)

Regardless of sunfish sightings, the north coast offers some incredible diving. The high-speed drift we did from Mangrove to Blue Corner was literally one of the most exciting dives I have ever done. And most locals seem to agree that Toyapakah is the most beautiful site. In addition, the south coast of Nusa Penida offers not one, but two predictable manta locations. What more could you ask for? (Oh yeah, a hammerhead!!!)

For Thomas and me, our experience diving along the coasts of Nusa Lembongan and Nusa Penida matched or even exceeded our experience at Sipadan. (Admittedly, we had some serious luck here!!!) However, several of the best sites are not appropriate for beginners and advanced PADI certification (or equivalent) is preferable. Currents can be strong, fast, and very unpredictable. We tried to dive Toyapakah on day two and the current reversed before our guide could even finish the briefing. WOW!

NOTE: Our underwater housing leaked during our second dive at Nusa Lembongan destroying our G12. Damn, there goes another camera down the drain. For that reason, we could not photograph or video our encounters with the mola mola. (Oh, the tragedy!!!) We would like to thank fellow diver Joost van Manen for allowing us to use his sunfish picture above. He was right next to us snapping away as we encountered the amazing animal.