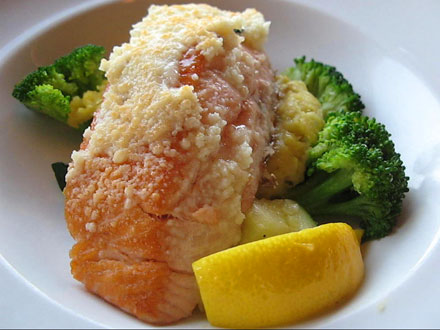 I can’t tell you how often I’ve heard that Americans have no food culture. Apparently, the whole nation lives on hamburgers and doughnuts. But it’s SO not true. They also eat microwave dinners and frozen pizzas. 🙂 Clearly, we Germans are so much more sophisticated with our sauerkraut, bratwurst and “real” black forest cakes. It should be obvious that our culinary preconceptions of other countries are almost always wrong, and they are especially wrong when it comes to food in the United States.

What exactly is American food? Well, it’s like asking what an American looks like. There’s no one answer. America is a complex melting pot of ethnicities, a hodgepogde of different cultures and customs. And the food across the country is as varied as the people are.

From New England clam chowder in the East, to sausage and shrimp jambalaya in the South, to wild Alaskan salmon in the Northwest, to Navajo fried bread in the Southwest, there’s no ONE American food. It is more like a blend of European, native American, Asian, Caribbean, and African foods.

Once considered regional specialties, these and other dishes have since been adopted and adapted all over the country. With California being a trendsetter in creating fusion cuisine, new and exciting combinations are popping up all the time. Care for the spicy Thai burger L.A. style, avocado and grapefruit salad, or sushi with jalapeno?

Yes, you will have to look beyond the KFCs and Burger Kings if you want to try anything other than fast food. Take your time and have some real American food. It is so worth it.

For those unfamiliar with American food, here are some of my favorite dishes:

You can find more information on regional specialties and scrumptious recipes on About.com.