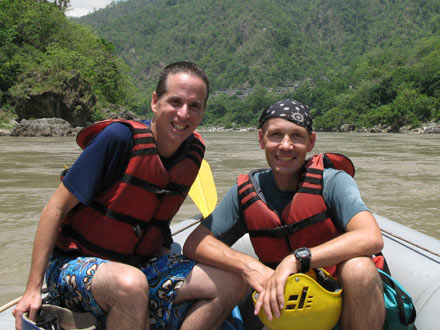 As some of you might remember from our Holy Crap posting in Varanasi, the Ganges is not exactly ready for bottling as drinking water. It seems Hindus celebrate the beauty of their most holy river by dumping trash, human waste, chemicals and anything nasty they have lying around into the sacred waters.

So when our crazy group of new friends staying at the Swiss Bandari Guest House suggested that we go white water rafting, I was skeptical to say the least. True, we are further up the river near its source and, theoretically, that should mean that the waters are cleaner, but judging by what I’ve seen in town, that’s not the case.

But that crazy group convinced me to take the plunge – literally.

The rafting company was impressively professional with excellent equipment and well trained guides. We all had life vests and helmets, and new rafters were given instructions on paddling basics. So far, so good.

But being the beginning of the monsoon season, the river was running high making rapids much less life threatening than we had hoped. There were some enjoyable runs towards the beginning, but most of the fun came from our insane group of traveling nutballs. We laughed and screamed and paddled like crazy towards anything that might jolt the boat.

Half way down the 14 kilometer run, we stopped along the rocky shore to jump off the boulders into the fast flowing water. My adventurous streak wouldn’t allow me to pass up the opportunity to take the plunge into the holiest river in India. I was praying the water was clean enough, giving a whole new meaning to “leap of faith.” Several other risk-tolerant souls in our group joined in on the questionable fun. Far more sensibly health conscious than I, Thomas chose to skip the dip into the mud-colored flow and, instead, photographed our insanity from the bank. It was loads of fun, and the Indian pilgrims were suitably impressed by the fearless women in our group who chose to jump as well. (They may have introduced some threatening new concepts to the Indian women watching from the shore.) 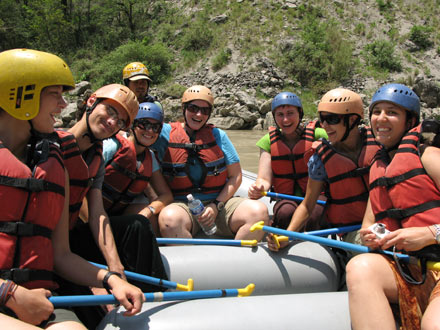 Back on the river, the ice-cold water seemed moderately OK above Rishikesh, but as our raft floated through town past ghats full of pilgrims taking ritual baths in the river, a large bag full of garbage floated by on its way downstream. Coming around a bend, we floated past a massive dump cascading down into the river and the scent of raw sewage flooded into our nostrils. Disgusted, the nine of us instinctively withdrew from the edge of the raft just as a new set of rapids came into view.

We paddled and laughed and yelled challenging the oncoming threat screaming “Yuck” and “Eeewww” and “Oh no, here it comes” just as one huge wave of liquid filth crashed over my entire body. I shivered and convulsed in disgust as everyone else screamed in hilarious horror at my lack of luck. And so goes our white sewage rafting adventure… future visitors to Rishikesh beware.

One response to “White Sewage Rafting”