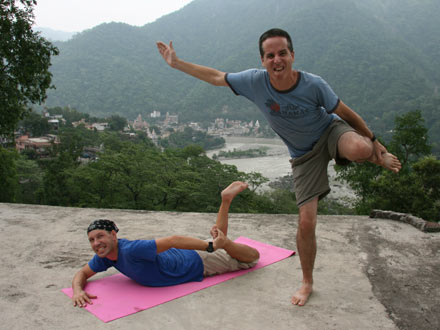 Our first yoga class was an important step toward self-realization. We sadly realized that we far from touching our toes. Little did we know that we were equally incompetent in the fine arts of “sitting straight” and “standing correctly.” It took a couple of 2-hour sessions before the yoga instructor could walk by us without looking like he was going to burst out in uncontrollable laughter (or possibly tears). But, slowly, step by step, inch by inch, TnT started to do yoga.

At first, we felt like especially awkward bulls in a china shop. Worried that judging eyes marked every mistake, we both felt like we were trapped in the ultimate game of public twister – left foot on blue, other left foot on yellow… oh my god, are we nothing but left feet? Quickly, we learned that everyone in the class felt equally insecure, and suddenly it felt like twister with friends – much more enjoyable. With each additional meeting, there was a natural progression to more complicated postures, and we felt more and more comfortable humiliating ourselves in front of the others.

It was almost supernatural what the yoga instructor could do with his body. (Can you lie on your stomach and stick your legs straight up in the air?) None of us were even close, yet we were having a ball trying to imitate him. There was a lot of gasping, grunting and laughing while attempting to hold some of the more awkward positions. “Open your shoulders,” the instructor would say in a guruesque voice, “open your mind, open your buttocks.” (Giggles from the students.) Yoga certainly was good fun, but more importantly, it really made a difference. Suddenly, we were far more flexible and Indian-bus-induced back pain had disappeared.

Although, we’ve made quite a bit progress, we are not quite ready for primetime. But never fear, we’ll definitely continue our instructions along the way. We’ve got to touch those toes. 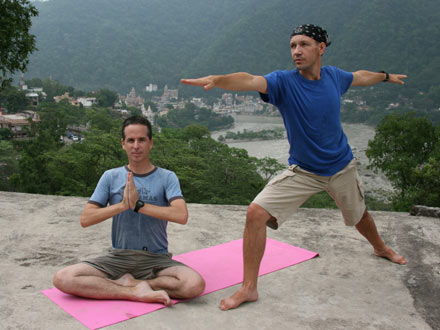 One response to “TnT Do Yoga”