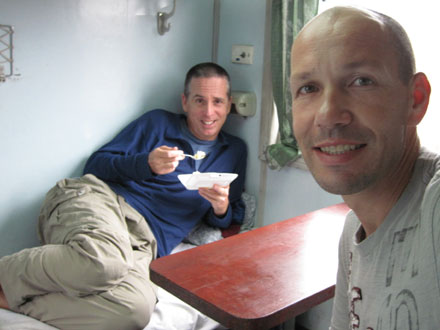 When we first came to Vietnam, we had committed ourselves to a relatively low-maintenance trip focused on food and fun. Somehow, the adventure just seems to find us. Mere hours into our overnight trip from Hue to Hanoi, the train unexpectedly stopped on the tracks outside Donghoi. For hours, no movement. Although the train was full of foreigners, no announcements in English, no helpful conductors, nothing. Just rumors.

Eight hours later, no announcements, no official statements, but through cellphones and mobile Internet access, passengers had determined that all of central Vietnam seemed to be under water. Stories circulated that flood waters had covered not only the tracks, but also roads leading onward to Hanoi as well as back to Hue – evidently, we were trapped. Still, no official information. I have to admit that, at the beginning, I found the situation rather amusing because it recalled my early travel days in bureaucratically mind-locked China.

After 11 hours, my humor started to fade. Rumors started to circulate that we would be on the tracks for an additional day. After 13 hours, those rumors suggested we might be there for three days or more. Insane. Stories spread through the train that all flights in central Vietnam had been canceled, all road traffic had stopped, central Vietnam had come to a standstill. When some foreigners suggested that they would leave the train and look for hotels, Vietnamese stated we would lose our tickets if we left and they advised us to stay on the train and sit it out. Still, after 15 hours, no official statements.

Groups of foreigners huddled together in their compartments running through various scenarios. Thomas and I had been through many similar situations in the past and we knew that, at the local level, things usually start moving pretty quickly after such problems. Displaced people have to travel, family members must return home, food and supplies can’t sit on the road too long. We advocated getting a group of foreigners together and trying to piece together taxis, minivans, and local transport hoping to drive around flooded regions or cross them by boat. This was a tough sell to other foreigners who were quite intimidated by the concept. And it would have cost us a fortune to do it alone.

But coming to any decision was difficult because information was so scarce. Were any hotel rooms available in Donghoi? If we left the train to look for a hotel, would rail officials let us back on the train if we couldn’t find one? Were airports really closed? Were roads really fully blocked? How bad was the flooding? Of course, rail official offered zero information. 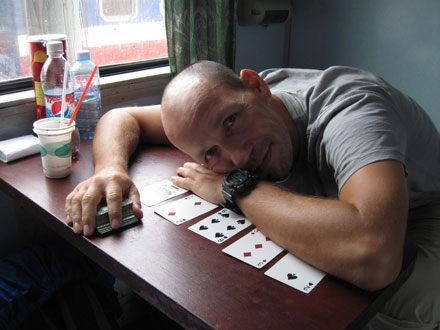 Eventually, after 18 hours, a group of foreigners, led by yours truly, decided to march into the Donghoi railway station and very loudly demand information. Reluctantly, they stated that airports were closed and roads were impassable. They told us to return to the train and wait. Mockingly, they offered to refund one-third of our fare.

Thomas and I were enraged at their lack of interest, lack of information, and bad attitudes. Sitting in the train indefinitely was not an option, so we decided to go into Donghoi and find a hotel room. As we were retrieving our luggage, a Vietnamese man who had befriended us on the train implored us not to go. “A bus is going to Hanoi tonight. It’s waiting in front of the train station,” he told us, “They are leaving at 8 PM.”

“What?” I asked, “There’s a bus? Why are they waiting four hours to leave?”

“They need time to fill the bus. They must sell tickets.”

“What? There are 100 passengers here who are desperate to get to Hanoi. I can fill that bus in 15 minutes.”

After verifying that there were actually TWO buses sitting in front of the station and buying our seats, I ran back to the train and within minutes foreigners were rushing out to purchase their seats. (Now, I have to simply make a comment about how ridiculously passive people are. All those foreigners sitting in the train, and nobody demanded information from rail authorities NOR did they discover that two buses were sitting in front of the station. And the Vietnamese, who knew about the buses, failed to tell anyone about them, presumably because they were worried about offending rail officials.)

Thomas returned to the rail office to get our paltry refund and, in a wonderful stroke of luck, the clerk miscalculated our one-third refund and actually gave us two-thirds instead. Thomas, who was seriously pissed off with the rail officials, grabbed the money and ran. Ironically, the refund just covered our bus tickets to Hanoi.

The bus trip was a second adventure, an epic, overnight journey across hundreds of miles of flooded lands. Whole villages were underwater. Groups of people had gathered on hillocks and rooftops and were simply sitting there waiting for the waters to recede. We drove past one surreal house with an open family room. The entire family was just sitting there in their flooded house with their legs pulled up onto their plastic chairs staring at us as we drove by. The wake from our bus sent small waves drifting into their home.

At several points, the water levels were well above the bus tires and we feared the bus might actually stall right in the middle of the floodwaters. Somehow, we just kept pushing through. Emergency vehicles and military rescue vehicles plowed by us in the opposite direction. We entered an area that looked like we were driving through open ocean. I could see no land in any direction and waves were lapping up against the side of the bus. Where were we? I had no idea how the driver was even following the road. I heard someone near me in the bus whisper, “He says we are driving through rice-paddy fields.” Suddenly, a single house drifted by in what looked like a rough sea.

After hours of water, we finally emerged from the flood zone and I fell asleep as we continued on to Hanoi. Success. The one thing that our trip verified is that plenty of traffic was working its way north to Hanoi. We also discovered that people were able to travel back to Hue as well. As if that weren’t enough, the airports had not been closed. Nothing the railway officials had told us was true. But why?

Travelers who stayed behind reported that railway officials had been attempting to keep us in the train until they could arrange buses of their own. Unfortunately, the cheap asses had spent hours trying to bargain down the price of transporting passengers past the flood area. Evidently, this bargaining time had given competing bus companies the idea to come and pick us up at the station themselves, which explains the bus we took. All in all, a good dose of Vietnam’s less glamorous side and a not-so-faint memory of that tight-lipped Communist bureaucracy that once plagued travelers (not to mention locals) across much of the globe.

One response to “Trapped”