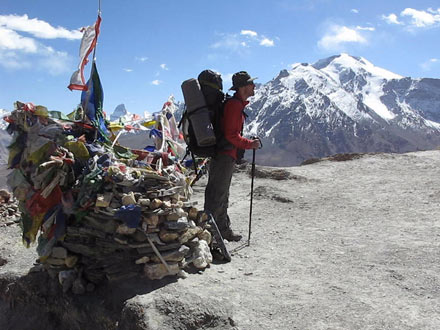 “Only two more days of walking,” I thought to myself as I was huffing and puffing up toward Sirsir La, a 4,800 meter (15,744 ft) pass just 100 meters ahead. This would be the eighth pass in the last 18 days and it certainly didn’t seem to be getting easier. I looked back and saw Tony leaning over his hiking poles resting. All I could hear was the wind and my own breathing. Then I caught a last glimpse of Photoksar in the distance, the little village we had left only 3 hours ago. What an amazing place to be.

I continued walking. Just as I was approaching the saddle studded with colorful prayer flags, I heard a low rumbling coming from the other side of the pass. “What the heck?” I wondered, pushing on faster to see what was going on. As I got closer to the top, the noise suddenly increased. I looked toward the source and couldn’t believe the evil I was witnessing.

A caterpillar steadily moved over the barren soil toward the pass leaving an ugly dirt road in its wake. Tony and I were flabbergasted. “They’re already here,” we yelled out in unison.

We had heard about the military building access roads into Zanskar but nobody had mentioned how far the roads already extended. Our hope had been another day of walking on foot paths without seeing a single soul. But instead, we had to scramble over a churned-up dirt road, interspersed by bits and pieces of the former hiking path while maneuvering around heavy road equipment. What a shocker! 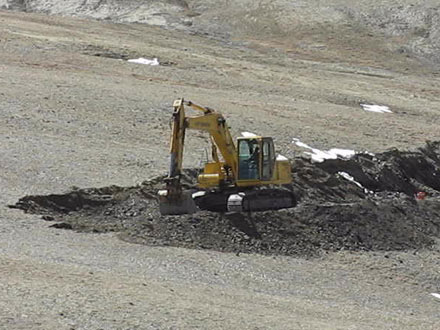 If you talk to Zanskaris, they all welcome the new road which will connect them to the outside world. (I have to admit I don’t blame them – who would want to walk for days to buy supplies or get medical treatment?) They believe it will bring greater and better things. I’m not so sure about that.

One thing is for sure – the new road access is going to change the culture, and with it the face of tourism. With a shift from backpacker/adventure tourists toward higher end drive-me-around-in-my-super-deluxe-bus kind of tourists also comes a shift in who benefits from tourism. Is it going to be Zanskari families offering homestays, or new fancy hotels which will spring up all over the place? I think I already know the answer.

One response to “The Eighth Pass”