The Curse of the Hijra 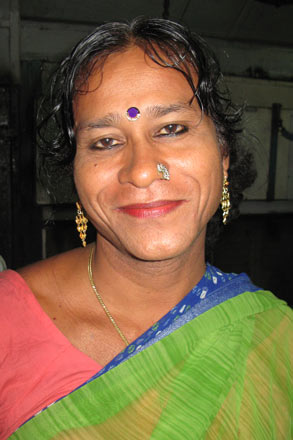 The first time I saw two hijras in a hotel lobby fighting with the receptionist, I was very confused. Loud and obnoxious, aggressive and lewd, these women did not behave like any other Indian women I had seen. Why? Because, as it turns out, they were not women – at least not in a traditional sense.

In the West, for a lack of a better term, hijras would be called transgender or transsexuals. But their reality is much more complex than that. Exactly what or who they are is a matter of opinion. Transvestites, eunuchs, hermaphrodites, prostitutes, the third sex, performers or witches. We’ve heard it all.

Dressed in traditional saris, wearing make-up and jewellery, we’ve encountered hijras on many occasions. In small villages or large cities, on trains or in hotels, hijras go around casting curses on men and then demanding money to change the curse to good luck. And they can be quite convincing. Often you can hear them before you see them. Loud finger snapping followed by a popping hand gesture announces their arrival before they shove their rupee-demanding hands in people’s faces. And they don’t take no for an answer. Indian men usually pay up quickly afraid of bad luck not to mention obscene gestures and profane language hurled at them. Once they cough up the cash they get a blessing and are safe from the curses – until the next hijra comes along.

It’s definitely amusing watching Indians squirm and pull out rupee notes to get rid of the hijras. Not being overly superstitious, Tony and I usually just smile and then ignore them. Not so for this photo. I actually followed the hijra through the train and caught up with her in the kitchen where she was counting her money. I wasn’t going to take any chances and payed 10 rupees before I asked to take her picture. She straightened her sari and agreed with a smile. Then she put her hand on my head and mumbled what I hoped was a blessing.

But there are more profitable ways to make money than hassling people on the trains. Hijras are known to crash weddings and miraculously appear at birth celebrations of male babies demanding lots of money. The parents and newly weds are eager to pay for good fortune. I mean, what other options do they have? It’s either cash or curse.

Although most hijras are able to eke out a living and some can rake in the bucks working the high-end wedding circuit, their social status is not much better than that of the Untouchables. Outcast intersexual beings, hijras are regularly forced into prostitution and are often subject to police brutality.

But don’t mistake them for lowly prideless beings. One exceptional hijra we encountered moved through our train loudly popping her hands cursing the men. When she came to Tony and me, she skipped over us, neither cursing us nor demanding money. Hearing the surrounding Indians debate why we had been skipped, she announced that foreigners are constantly being subjected to an unending line of Indians demanding handouts. With tremendous pride, she stated that she had spared us to show us that there is more to India than beggars!

22 responses to “The Curse of the Hijra”