Names such as Ladakh, Zanskar, Spiti, Mustang, Upper Dolpo, Guge and Sikkim, the isolated mini-kingdoms that run along the spine of the Himalayas, conjure up images of adventure and exotic Tibetan-inspired mysticism. Until the 1970s, most of these regions were completely off-limits to foreigners. Even now, many of these regions, including Sikkim, require special permits for foreigners to visit. For this reason, they are on the must-visit lists of adventure lovers everywhere. 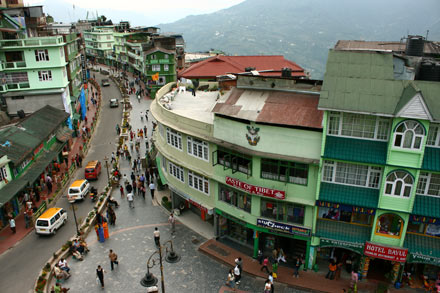 Having been to many of these regions ourselves, we are well aware that the 21st century is quickly coming to the Himalyas – I have no illusions about their continued isolation. However, I have to admit Sikkim threw me for a loop. Driving into the tiny capital, Gantok, I was shocked to discover an incredibly elaborate pedestrian mall lined with trendy shops, restaurants, and cafes serving cappucino and blueberry cheesecake. At first glance, it felt like I was somewhere in Europe, an impression that was enhanced by the much cooler temperatures. The living standard here appears light years ahead of the rest of India. Nice cars, fashionable haircuts, working women, uniformed kids skipping through the perfectly paved streets. Amazing.

Unfortunately, modern living means very little traditional culture outside the Buddhist monasteries. The only tradionally dressed people are monks and nuns, the occasional Lepcha tribal person, and the few Bhutanese who cross over to go shopping in Gantok. If you are seeking traditional culture, this is not really the best part of the Himalayas. However, we specifically came to Sikkim for the landscape and the flora, and that leaves NO room for disappointment at all.

One response to “Surprising Sikkim”