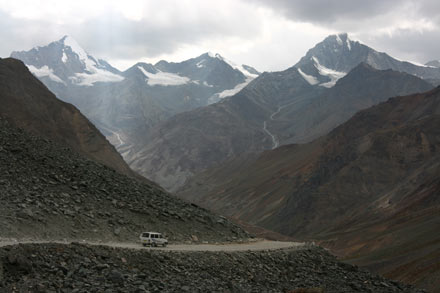 After being thrown into the hustle and bustle of Manali, we were ready to head up to Buddhist dominated Ladakh in the northernmost state of Jammu & Kashmir. This was as far north as we could go in India without crossing over the border into China or Pakistan.

Since all the bus companies in Manali were convinced that only one driver was needed for the 22 hour drive to Leh, we decided to hire a jeep with three other travelers and split up the journey into two days. We just weren’t in the mood for our driver to fall asleep, not to mention a driving marathon over some of the highest passes in the world. 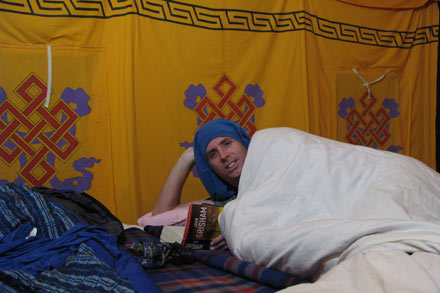 It was such a luxury to have our own vehicle and to stop whenever we wanted, yet after eleven hours of rumbling over a mosaic of dirt and asphalt, all of us were totally exhausted. We spent the night camping in Sarchu, a town made up of a series of tented camps on the wind-swept plains. Our frigid deluxe tent even came with its own toilet separated from the sleeping area by a wall of heavy linen and a zippered door. Not too shabby.

Still half asleep after a chilly night on the high plains, we rolled into the car to continue the drive to Leh. Creeping along a narrow road cut into the side of a mountain, we were suddenly jolted awake by what we thought was a massive landslide a mere 100 yards ahead. When the rubble finally ceased sliding down over the road and the dust cleared, we got out of the car and carefully inched forward to evaluate the situation.

Out of the blue, a caterpillar broke through the debris from the opposite side and started clearing the road. What we thought had been a landslide turned out to be a bunch of construction workers blasting away part of the mountain to widen the road. Somehow, they didn’t think it necessary to warn any of the approaching vehicles. That’s India in a nutshell – just blast away the mountain and hope nobody gets hit! That warning sign would have cost what? Maybe 20 cents? 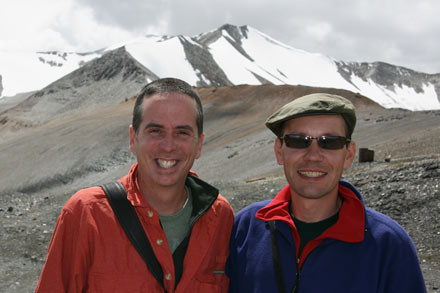 But the day also included several highs – literally speaking. Within the next few hours we cleared two mountain passes over 5,000 meters. The last one, Taglang La, claims to be the second highest motorable pass in the world (5,328 m, 17,582 ft).

Just as we were getting out on top of the pass to take the obligatory picture, a Swiss bicyclist arrived huffing and puffing. Totally impressed, we congratulated her for having made it to the top ahead of a bunch of other cyclists in tow. I can’t imagine biking up that thing. Frankly, I was quite happy to get back inside the car which provided shelter from the icy wind and the snow falling more heavily now. As we descended the mountain to a flat plain, we passed a group of bicyclists heading in the opposite direction towards Taglang La. One very overweight guy was already walking, pushing his bike along – and they hadn’t even started the climb to the pass! (With a long stretch of snowy wilderness ahead, I wonder where he ended up sleeping that night.) 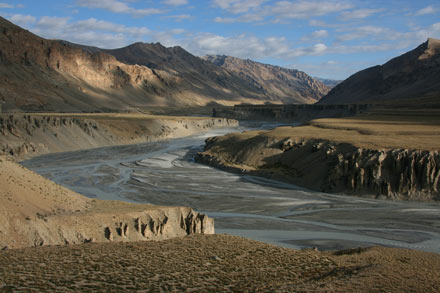 After rattling along through some of the most surreal landscape on the planet, past colorful river valleys and bizarrely eroded cliffs, we finally arrived in Leh, the capital of Ladakh. Two days of solid traveling had taken us to a place that wasn’t quite as isolated as we had hoped (but more about that later).

One response to “Road to Leh”