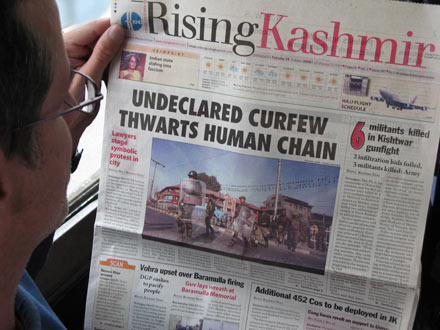 As we mentioned before, Indians refer to Srinagar as “heaven on earth.” Kashmiris often joke that God created heaven on earth and man made it hell. To us, Srinagar was indeed paradise, if somewhat rough around the edges.

We are no fools. We knew about the political situation and the ongoing problems, but Kashmir is the safest it’s been in years. This was the time to go. Our first night on the housboat was just perfect – the calmness of the lake and the amazing sunset lulled us into thinking Kashmir is safe. But the situation was deceptive. It didn’t take long before our first reality check.

Next day, we headed straight to Srinagar’s old city, picking up some glossy leaflets and a map from the tourist office on the way there. When we announced our plans to visit the mosques in the old part of town, the friendly officer from the tourist bureau very calmly stopped us, “You’re not going to the old city, they are stoning the police today.”

Seeing our puzzled looks, he went on to explain that on Fridays, the holy day in Islam, Muslim extremists always stage protests in the old city. Apparently, throwing rocks at the security forces is part of that statement. So, eager to stay out of it, we returned to the safety of our boat on Nagin Lake.

Hanging out at the lake, we had plenty of time to discuss the situation with the locals. Interestingly, they insisted that the fundamentalists only make up a small minority, and that most Kashmiris do not support their extremist actions. “So how,” we asked, “can a small minority have such a tight grip on a city and paralyze everything at the snap of a finger?” “Why does the majority not take charge?” Nobody had an answer. Only shoulder shrugging.

The same discussion came up several times during our stay. We’d always push for an answer but to no avail. It certainly felt like they weren’t telling all they knew – not to us foreigners anyway.

The day we planned on leaving Srinagar also happened to be the day for a scheduled city-wide pre-election protest. Not something we wanted to be caught up in, so we postponed our departure by one day. This turned out to be a good decision. Quickly, the protests turned violent and the whole city was put under curfew. Everyone on the boat was on edge not knowing how long this situation might last.

When French Thomas came to Kashmir this summer, he found himself in a similar situation – Srinagar under curfew. What was supposed to last no more than a day, dragged on for a week and a half! He eventually hired a car and driver and sneaked out of Srinagar in the wee hours of the morning making it out safely.

As luck would have it, the curfew lasted for only one day this time and we were free to go after that. I have to admit, Nagin Lake is the place to be if you are trapped for one reason or another. What better place to sit and wait than in a beautiful houseboat on a tranquil lake. Srinagar is amazing but the situation in Kashmir remains in flux. Paradise today can quickly become a nightmare tomorrow.

One response to “Reality of Kashmir”