Thomas and I have made our way to Calcutta, the center of all that is chaotic and crazy in the world. Every second is pure insanity, my eyes can’t keep up with the movement. But like Mumbai, Calcutta is a colonial gem in the rough, and fans of that British colonial vibe, which is disappearing quickly around the world, will love this city, assuming they can learn to appreciate the chaos and the intense heat that comes with it. 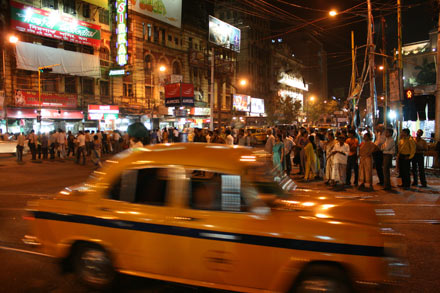 During the white-hot day, I have the continual feeling that I’m going to drop over dead from heat stroke. It seems like we spend most of our time hiding from the sun. But at night, Calcutta is perhaps the greatest location in the world for people watching. Emerging from the shadows like tropical vampires, Indians and tourists take to the streets. Strolling the filthy, steamy city at dusk, one cannot help being drawn into the manic sense of euphoria that results when the nuclear sun sets. Snacks are roasted on metal-drum stoves as hand-drawn rickshaws race through the roads. Veiled women intermix with painted holy men as hijra pop curses at passers-by. It’s like performance art on the largest scale imaginable!