Leshan – Buddha for the Masses

The world famous Buddha at Leshan claims to be the largest in the world. Internet research suggests it is not, but concedes that it is the largest Buddha carved into the side of a cliff.

Regardless of its size – it and its associated temples and gardens are spectacular. The Leshan Dafuo (Big Buddha) proved to be more than another check on the list of world monuments, it brought me a bit of travel enlightenment as well.

In my attempt to navigate the sea of commercial nightmares which have appeared in China, we came very close to skipping Leshan. That would have been a monumental mistake (pun intended.) Sometimes, you just need to face the crowds to see the wonder.

But Big Buddha helps those who help themselves. Knowing that the masses would descend upon Dafuo, we showed up early to beat the crowds. When we showed up at the site, to our pleasant surprise, the site was almost empty. We casually strolled through the gardens, took in a few rock carvings and then started down the staircase to take in the Buddha in all its glory. 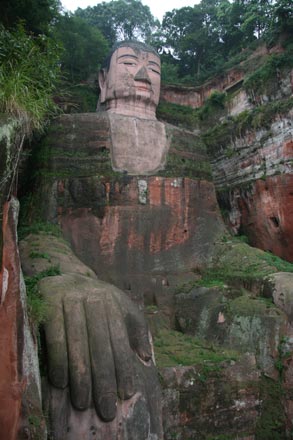 Sometime later, down near Big Buddha’s feet, we suddenly noticed crowds gathering on the upper cliffs. Suddenly, the waves of humanity started to back up and we noticed a line leading down the cliff – it was at a complete standstill.

We took in the statue and photographed ourselves posing near Big Buddha’s toes and continued back up the cliffs to the top of the Buddha. The once calm square at the top had been transformed into a Disneyland-style line – with a wait of over three hours! Chinese yelled and screamed on their cellphones, tourists whined in agony at their misfortune, and we gawked in disbelief at what had happened in the 45 minutes we had been at the bottom of the cliffs. It was worse than we had imagined. 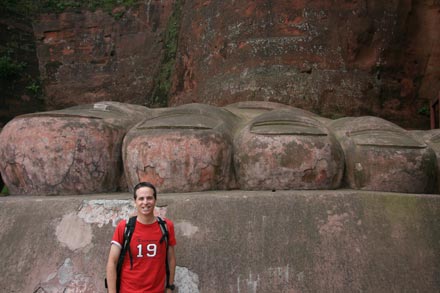 Not so strangely, the gardens and temples in the Buddha complex were largely abandoned because thousands upon thousands of people were locked up in the line. Most of the foreigners we talked to didn’t even get to walk down the cliffs to see the Buddha. One woman had chartered a taxi from Chengdu so she could see the Buddha only to discover she had no chance in hell of walking down to the base. She admitted the taxi was sitting at the gate waiting for her at that very moment.

The moral of the story is obvious – get there early. But in 21st century China this moral takes on very new meaning. Gone are the days of strolling an empty Great Wall or taking in the warriors in Xian in silence. The new China is bursting at the seams with tourists, and visitors will have to accept this rather grim new reality.

But there is an even more terrifying change yet to come! In the not so distant future, the masses will be heading for Europe or the U.S. Imagine Notre Dame or Yosemite with a billion extra visitors – not such a pretty prospect for our travel future.

3 responses to “Leshan – Buddha for the Masses”