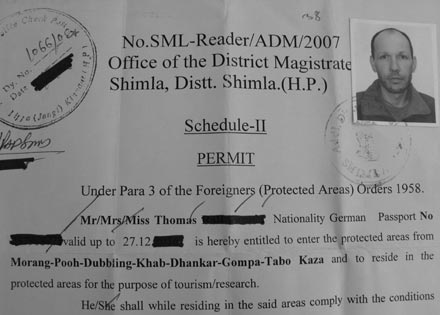 India without paperwork wouldn’t be India. Before setting off to Kinnaur and Spiti, we had to obtain inner-line permits, which would allow us to stay in this remote region for 2 weeks.

Why all the fuss? The road winding precariously along steep and narrow gorges north of Kinnaur into Spiti is as close to Tibet as you can get in a vehicle from the Indian side. Only a few kilometers from the border, the region is dotted with old trade routes into Tibet – and, of course, military checkpoints to make sure you are moving through swiftly without wandering off into sensitive areas.

Their fear is quite understandable. It’s very tempting to go trekking in the spectacular mountains, and to end up in Tibet at the end of the day. But responsible as we are, we don’t want to cause a war, or worse, get arrested (not to mention getting shot by Chinese border guards). Although the bureaucracy is somewhat annoying, it’s nothing compared to the ridiculously complicated and expensive processes we had to go through to travel through Tibet, so I guess we shouldn’t complain.