Even though we went off-season trekking in the Everest region and there were fewer hikers on the trails than during our Annapurna Circuit trek, we ended up meeting a bunch of interesting people again. 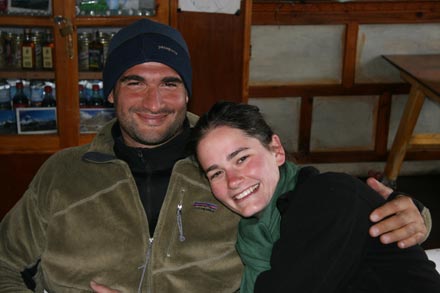 We met Brian and Jessy, two friends from the States, a few days into the trek and hung out with them in the same lodges for a while. Brian, a math teacher from Manhattan, was on his way back to New York after having spent a year in Iraq with the American military. Talking to Brian, a critical thinker with a brain, gave us a great deal of insight into the US military (and many of its problems). Jessy, who met up with Brian in Kathmandu to go trekking, grew up in Sitka, an island off the coast of Alaska. She entertained us with hours of crazy stories about life in Alaska. (Did anyone out there know that it rains 350 days a year in Sitka?) Eager to leave the island, Jessy moved to Seattle (for the great weather 🙂 ) where she now works as an audiologist for the VA Hospital. 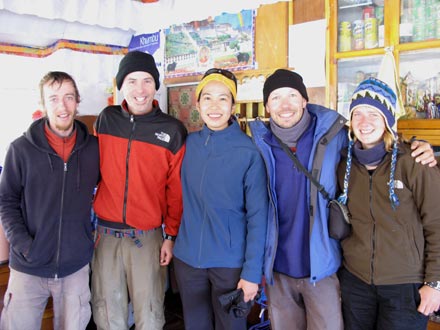 Ian and Tamsyn, shown in the second picture on the left and right, are the British couple we met on the Annapurna Sanctuary trek – we wrote about their nomadic life in a previous entry. After talking them into doing the Everest trek during a dinner in Kathmandu, we met up with them during our stay in Gokyo.

Yifan (in the center) who immigrated to Canada from Taiwan when she was 13, was trekking all by herself without a guide or porter. During our travels, we’ve met quite a few women traveling on their own, even in the remotest parts of Africa. I always admire single female travelers for their courage and stamina (especially after seeing that monster tripod Yifan was carrying).