Have you ever stayed in a stone tower in a huge medieval desert fort? No? Well, neither had we until we found this stunning room within the city walls of Jaisalmer’s fortress. Located inside a bastion atop the massive sandstone walls, our room has a 180-degree view of the surrounding town and the Thar desert streching out beyond – all for $10 a night! It’s a fairytale come true. 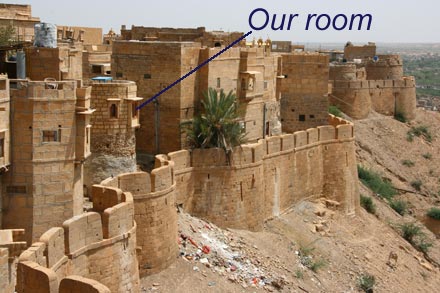 It wasn’t an easy choice, though. We were confronted with an important ethical decision. As Tony mentioned in his previous posting, Jaisalmer Fortress has been on and off of the World Monument Fund’s list of endangered monuments. The question we had to ask ourselves was whether we could stay in the fort without having a negative impact on its structure. We could’ve just taken a room in any of the hotels outside, but how could we possibly pass up such an opportunity, especially with Tony being such a walled-city-freak?

After much deliberation, we decided to stay inside. Tony immediately devised a plan to cut our water consumption to relieve the ailing drainage system. To start with, we’re washing with half a bucket of water a day instead of taking a shower. Flushing the toilet is reserved for major occasions. And, most importantly, we have decided to eat our meals outside the fortess walls to compensate for the water we are using within the fort. Our beautiful room has a modern bathroom, but because of the restrictions we have placed upon ourselves, it feels a bit like camping. 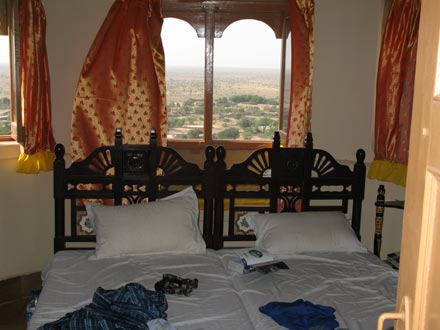 So, with all the cuts we’ve made, do we actually have more of an impact than the tourists who stay outside but come into the fort for their meals? Probably not. In fact, the first thing we did when we moved into the room was repair our continuously-running toilet. All that wasted water would probably have brought down the fort within days.

Our beautiful, circular stone room adds so much to our desert adventure. There’s no better feeling than coming back after dinner, sitting on the cushioned window bench and watching life from above while eating a Kitkat. I feel like a balding Rapunzel.

One response to “Fortified Living”