100 of the World’s Most Endangered Monuments 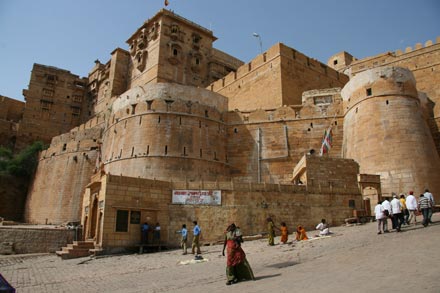 The 900-year-old Jaisalmer Fort is a stunning piece of Indian desert architecture. As I mentioned in the pictorial, it is THE desert dream – almost a cliche – a medieval sandstone masterpiece of narrow, twisting alleyways, havelis, palaces and temples surrounded by massive walls with 99 bastions. What’s more, it’s India’s last living fort, a quarter of Jaisalmer’s population lives within the fort itself. I’ve never seen anything like it in Asia, the Middle East or North Africa. But this magnificent piece of history is in serious danger of collapse.

Built at a time when water had to be carried up from sources outside the city walls, the fort was not built with adequate drainage for 21st-century water usage. Piped in water is slowly wearing away the sandstone and the increasing number of guest houses and restaurants within the fort has worsened the problem. Already, several of the bastions as well as palaces and havelis within the fort have collapsed.

The problem gained international attention when the World Monuments Fund added the Jaisalmer Fort to its 1996 list of the World’s 100 most endangered monuments. Overwhelmed with the enormous financial responsibility of caring for one of the world’s largest collections of architectural treasures as well as some of the world’s most endangered wildlife, India was, understandably, slow to react. The monument was again added to the 1998 and 2000 lists. Increased world attention, forced India to take some steps to repair the fort and prevent further collapse, but further work must be done.

Countless monuments around the world suffer from neglect, vandalism, climate change, and a host of other problems. From the Loropeni Ruins in Burkina Faso to the Brener Synagogue in Argentina, sites are in trouble. We strongly recommend taking a minute to go to the World Monuments Fund’s website and exploring their current list of endangered world monuments. It’s eye-opening.

2 responses to “100 of the World’s Most Endangered Monuments”