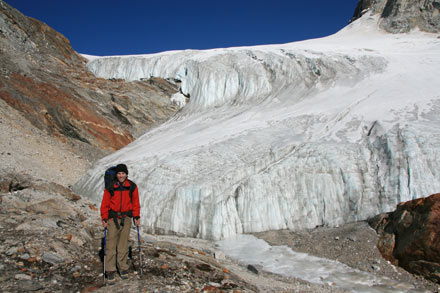 Moving on from Gokyo to Gorak Shep, we had two options: hike over Chola Pass and get there within a couple of days or walk around the mountain range in about three days.

Many people had warned us not to cross the pass without a guide. There was a glacier crossing that might require crampons and ice axes, there were too many unmarked paths, the lodges on either side of the pass were already closed,… and the list went on. Despite the warnings, we knew of single travelers, and of groups of elderly trekkers who had recently hiked over the pass successfully. With this in mind and after doing considerable research, we decided to cross Chola Pass. 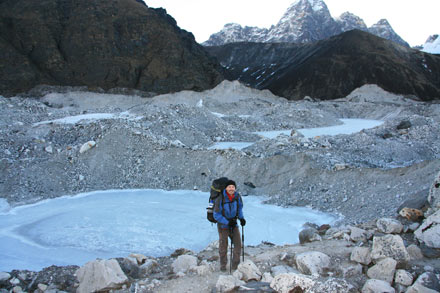 Guide book in hand with a description of how to get to the pass and where to cross the glacier with minimum exposure, we set out at 6:30 in the morning. We had stocked up on plenty of water and food, had rope to wrap around our shoes when walking over ice (a tip from many guides and porters), and were quite confident about our decision.

The first few hours of walking were pretty straight forward. We successfully crossed the Ngozumpa glacier, the largest glacier in Nepal, winding our way along the narrow path through the glacial rubble past lakes of ice and white, powdery sand dunes. Next we found our way up a rocky valley carefully crossing an iced-over river several times – no problems yet. But then we finally came over a low saddle where we had to make a decision about which direction to go and which of the many paths to follow. Knowing we had to cross another glacier, the choice wasn’t too difficult since we could clearly see a prominent glacier to our left. Little did we know that Chola Pass was straight ahead and that its glacier was hidden from view (we wish our guide book had mentioned that). 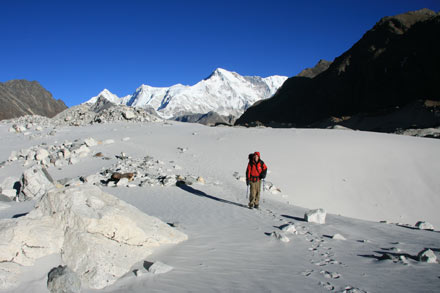 We spent the next four hours trying to figure out how to get around this huge mass of snow and ice that cracked ominously. This involved climbing over sliding boulder fields with our 16-kg (35-lbs) backpacks, following an extremely steep path abruptly ending in a landslide zone, and screaming and yelling out of frustration. 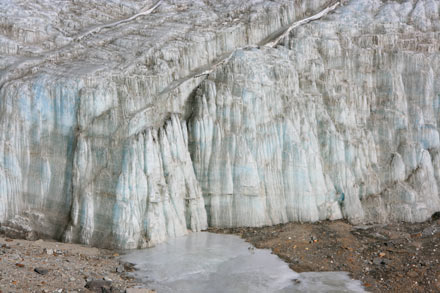 At 3:00 PM, completely exhausted, we eventually decided to return to Gokyo. When the sun went down after a couple of hours, we walked for a while in almost complete darkness before the full moon lit up the landscape like a spot light. Then the last hurdle – we had to get back across the Ngozumpa glacier, which took about an hour to cross. The path, which had not been too difficult to find during the day, was now obscured by the dim light and was quite hard to follow.

After more than 14 hours, we finally returned to Namaste Lodge in Gokyo in the middle of the night barely able to walk and stand upright. Man, did the owner look surprised to see us again.

For the next few days, we were the talk of town. Luckily, our little misadventure turned out alright, but it wasn’t without consequences. Because of our experience, several people decided not to cross the pass. Also, our failure was later used by lodge owners in Gokyo to warn other travelers not to cross the pass by themselves.

As we later continued our trek walking around the mountain range to Gorak Shep, we kept meeting people who had heard about us – the two guys who didn’t make it because of a huge landslide and who returned after 20 hours. It was almost amusing to hear how our story had suddenly changed just within a few days. What will our story be like in a year from now?