Burkas and the Art of Roti Canai 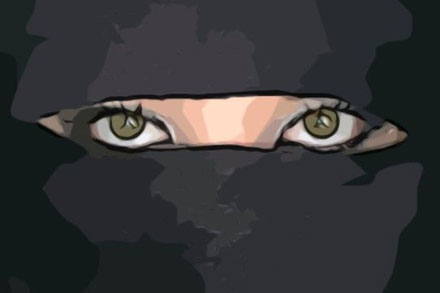 Twenty years ago, the markets of southern Thailand and Malaysia were visually stunning events marked by the colorful silk robes and wispy conical headscarves worn by ethnic Malay women. Eye-popping floral prints and soothing pastels greeted visitors as did the hospitable smiles of chatty sales women. But not-so-subtle changes reveal the allure and the sway of more fundamental Arab influences on the once moderate Islam of Southeast Asia.

Increasingly, we are seeing fully veiled women, and much of the colorful clothing has been replaced with solemn shades of black and grey. Equally noticeable is the more conservative behavior of these women. Interestingly, outside of conservative Aceh in northern Sumatra, this kind of clothing was virtually absent the first time I came to Southeast Asia in 1990. The visible shift in style along with references such as this disturbing menu in Penang can leave visitors somewhat uneasy.

For Thomas and me, these shifts can be unsettling for various reasons, most importantly some residual fears after being caught up in the attack on Mumbai. More severe Islamic clothing still sends a shiver down my spine, whether it’s fair or not. Muslim friends we meet along the way assure us that clothes are  just clothes. On several occasions, I have heard Muslim men swoon with memories of their veiled mothers cooking delicious meals for them as a child. These recollections have been completely incomprehensible to me… until now.

Entering the small restaurant in Trang town, we were greeted by a young woman wearing typical, colorful Malay garb, but when we tried to order in English, she ran into the back and brought out another woman dressed in somber black and completely veiled with the exception of a narrow slit revealing her eyes. Interestingly, many in Southeast Asia incorrectly refer to this kind of clothing as a burka. In reality, what the woman was wearing is called a niqab; burkas are full length veils which cover the entire body. For some reason, this misnomer disturbed me as well: it was as if the people were trying to wear the most extreme clothing they could find, but got it slightly wrong.

The woman in black approached nervously gaining the courage to take my order in English.

“What would you like to eat?” she blurted out excitedly, I could tell her cheeks had bounced into a nervous smile under the veil, her happy eyes stared down at me waiting for an answer. She looked exactly like Kathy Najimy in Sister Act – with a veil. I immediately liked her.

We both ordered roti canai, a simple pancake-like bread served with a side of curry. She hurried over to the outdoor kitchen and immediately began preparing the dish.

Rather than rushing out an order of cookie-cutter rotis, it was immediately clear that this woman was preparing something special. She took a small ball of dough and massaged it with oil working it into a thin, tortilla-like shape. Suddenly, she pulled up the tortilla and whirled it around slapping it on the counter thereby stretching the tortilla into a miraculously paper-thin sheet. It was spectacular.

Just as the roti thinned to the point of ripping, she gathered the whole thing up into a wrinkly mass and bunched it loosely back into a ball. That was a lot of work for nothing, I thought to myself. But oh, was I wrong.

The woman in black loosely reflattened the ball into another tortilla shape leaving the veins and folds within the dough. She threw a spoonful of something spectacularly orange on the grill and fried the roti until it was irresistibly crispy. (I was literally drooling at this point.) Removing the roti from the grill, she dabbed away excess oil and then, completely unexpectedly, she started crushing the roti into bits. What was she doing?

Repeating the process four more times, she created two piles of crispy, crushed roti. She added a side of curry and presented us with the masterpieces.

Oh my god, there is food – and there is art. I promise everyone reading this that nothing served in any Michelin rated three-star restaurant would ever make me as happy as that roti canai. The curry was a savory, scented stew of sweet potato, chicken, carrot and cassava. Did I taste cinnamon in there? The flaky roti was so delicious that I thought either Thomas or I would literally break into tears. Thomas commented, with stuffed mouth, that the roti tasted remarkably like a dish his grandmother used to make.

Day after day, we went back to the woman in black to indulge in her supremely awesome roti canai and every day she greeted us with happy eyes and plates full of flaky goodness… until one day, she wasn’t there.

Oh my god, where was the woman in black? Who would fill our stomachs with the world’s greatest roti canai? We were told to come back the next day – it was an agonizing 24 hours. Where was she? Would she be back?

And surely enough, the very next day she was back ready to whip up our favorite dish with a mouth-watering side of curry. I was elated. And suddenly, I understood the feeling that those Muslim men had been trying to convey to us, and a little bit of my fear faded and was replaced with appreciation. The art of roti canai just might change the world.

If you would like to try this lady’s roti canai for yourself, her restaurant is just opposite Andaman Islands Tour and Travel near the train station in Trang. The restaurant sign is not written in English.

2 responses to “Burkas and the Art of Roti Canai”