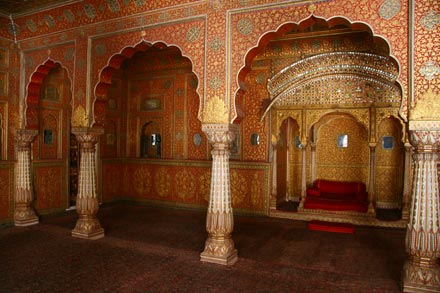 India is a first-class country to learn the fine art of bribery. Of course, there are no such courses offered anywhere (I hope), but life here teaches you very quickly. Among the sneaky “teachers” are train conductors, police men, immigration officers, and museum staff.

My first lesson presented itself somewhat unexpectedlyduring our visit to the palace in Junagarh Fortress in Bikaner, famous for its well-preserved interiors, a result of the fact that the fort has never been conquered.

Our entry fee included a compulsory guided tour, and we were immediately swallowed by an Indian tour group. As we were quickly shuffled through one beautiful room after another, our feeble protests over the fact that we couldn’t walk around ourselves were only muffled by excited Hindi chattering.

After we spoke up and expressed our frustration with this high-speed tour, the guide gave us a fatherly pat on the shoulders and, with a toothy smile, promised us a private tour afterwards, allowing for ample time to photograph.

When we finally passed through the last room displaying a couple of stuffed, moth-eaten leopards and dusty knick-knacks used by the royal family, the guide said, “This is the end of the tour.” I was like, “OK, so let’s start again.” But he was just standing there, waving his hand in front of my face and repeating that the tour was now over. After a minute or so, I became transfixed on his moving hand and noticed a folded-up 100-rupee bill subtly sticking out between his stubby thumb and index finger. It took me a few seconds to understand that this was it. I was about to bribe someone. 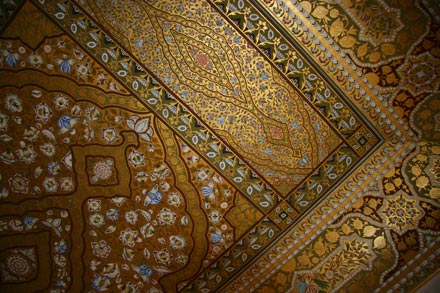 Looking around innocently, I stopped short of whistling some imaginary tune. Then I pulled out a 50-rupee note because totally stupid I am not. I was well prepared. Clearly, I had realized the guide was pulling some psychological trick by showing me a 100-rupee bill – like this was his price. But he didn’t know what a cheapo I was. So the 50-rupee note ($1.25) changed hands. There was no smile or thank you, not even an acknowledgment. To our surprise, we were just free to go and explore the palace on our own.

For the next hour, we traced our steps back and did the reverse tour in slow-motion. There were luxurious, red and golden rooms with ornamental lacquer work, elegant bedrooms with royal swing sets and sizable hand-operated ceiling fans, and tall rooms with vaulted ceilings painted in mostly blues, reds and whites. All the doors and ceilings were painted in fine detail either depicting abstract designs or historical Indian scenes.

Interestingly, every visitor was part of some group or other which moved swiftly through the fort like schools of fish. And there were Tony and I, strolling around and taking our time. None of the other museum guides or guards even took notice of us. There was an unspoken agreement. We had bought our freedom and they knew it.

I’m sure for some additional baksheesh we could have gone into the roped-off rooms themselves, but I thought this was enough practice for my first lesson. 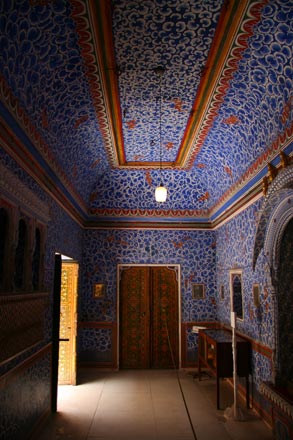