Thomas and I have finally taken the leap… out of mainland Southeast Asia, that is. We’ve made our way to the Malaysian state of Sabah on the island of Borneo. 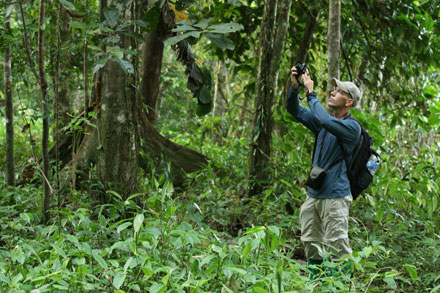 When people hear the name Borneo, they envision a vast wilderness shrouded in dense jungle – a 21st century “heart of darkness” which has somehow fended off the plague of modernity engulfing the rest of the world. Nothing could be further from the truth.

In fact, Borneo is the ultimate battleground in the war between environmentalists and commercial interests seeking to harvest the world’s resources. Much of Borneo has been devastated by these interests – and we come here fully aware of that fact.

I have been to Borneo before in 1991 and that battle was in full swing even then. Large-scale deforestation and conflict with native peoples presented scenes far more devastating than any fictional scene in Avatar. In some ways, the war is over now and the commercial interests have won. So why do we come to Sabah knowing that?

Because Borneo still offers up scraps of the past. Pieces that have somehow survived intact. One of those remnants is Sipadan island, consistently ranked among the top ten diving destinations in the world. We also hope to give Thomas, who has never been to Borneo before, a glimpse of the island’s once stunning natural heritage. In Sabah and further south in the Indonesian state of Kalimantan, we have also made it our goal to spot some of the island’s remaining orangutans in the wild. Some pretty sensational attractions for an environmental disaster, no?

Every post we write here could read like a tirade on the destruction of Borneo’s wilderness – lord knows we’ve been harping on that throughout Southeast Asia. But we have made it our goal for this portion of our trip to pull back from the proselytizing and focus a little on the beauty we find here. We’ll see if we manage to bite our tongues.