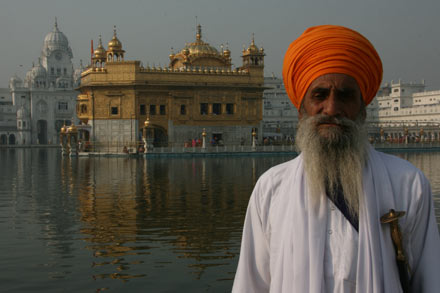 Sikhism is a monotheistic religion developed in the 15th century based on the teachings of Guru Nanak and nine successor gurus. The religion is unique because the Sikh concept of god is non-anthropomorphic. (That’s cool!)

The religion developed in Punjab, a region which is now divided between Pakistan and India. After partition, the dividing of India, most Sikhs moved to the Indian half of the region. There are still some living in Pakistan, although that’s a bit of a challenge.

Sikh houses of worship are called gurdwaras. They are usually large, vertically constructed white marble buildings with domes and spires. Sikhs are very open to outsiders and visiting a gurdwara is always a joy. Unlike many Hindu temples, visitors can fully explore the premises free of charge and are never made to feel as though they are outsiders.

Before entering a gurdwara, you are asked to remove your shoes, cover your head with a scarf, and wash your feet before entering. If you are unsure of what to do, no problem, there is always a friendly Sikh person around to show you the ropes.