Sherpas are People Too 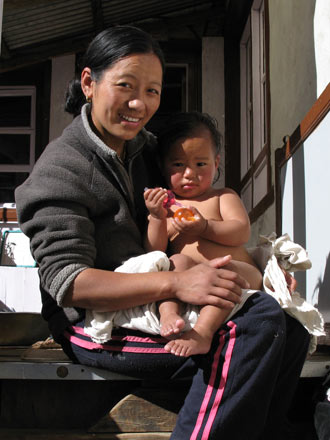 “Sherpa,” for many Western people, has become synonymous with “porter.” Often times on the trek I overheard people saying, “My Sherpa always eats daal bhaat…” or “When I talked to my Sherpa…” Fact is that Sherpa doesn’t mean porter, it is the name of an ethnic group living in the Khumbu region. It would be like saying, “My Californian can carry more than yours.” Sherpas are men, women and children whose ethnic identity has somehow become synonymous with carrying massive loads.

This misconception probably stems from the fact that most of the Sherpas are involved in the adventure-tourism industry, which has made the Khumbu region one of the most affluent among all of Nepal’s remote areas. Many Sherpas do work as porters, but many others run lodges, are tour guides, or sell souvenirs or trekking equipment.

Interestingly though, Sherpas themselves have now started to use the word “Sherpa” to mean porter. On more than one occasion, I heard people claiming that they were “assistant Sherpas” or that they were still in “Sherpa training.” And, it must be said that Sherpas can carry loads that would make most mortals fall to their knees in tears.

Anthropologically speaking, the Sherpas are closely related to Tibetans having migrated from the Kham region of western China to Nepal about 500 years ago. Nowadays, most Sherpas are very modern and wear mostly western clothes instead of their traditional Tibetan attire.