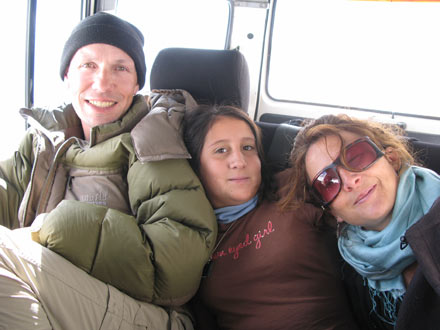 We’re still in Leh. A couple of days ago we walked up to a monastery with the sand mandalas I was talking about. When we were walking up we met 2 guys walking down. They and my mom talked like grown ups do and we decided to meet them for dinner. There names were Tony and Thomas, they’re about my moms age. We all decided to rent a jeep with a driver to go to the Nubra Valley. I was really looking forward to having snow after Delhi’s SCORCHING heat. There was no snow in Leh but there was enough to ski on the pass. I couldn’t wait to throw a snow ball at my moms head ” wah ha ha ha.”

We started off in the jeep on a scary, very high road. Which happens to be the worlds highest driveable pass! You had to honk every time you went around a curve because it was so sharp and narrow. The pass was part snow, part dry dirt, and split on a almost perfect line. On the brown dirt side the rocks were so sharp and ridged they looked like Tom when Jerry the mouse sent a golf ball through his teeth making them sharp and broken into spikes. That night we spent in a little town called “Hunder” like the word dog in German “hund.” Ha! didn’t think I knew German didya! The next day we went to some sand dunes. There we were about to get a camel ride for an hour. But it cost 500 rupees, which was only about 10 bucks for us. It’s alot for the Indian people though. 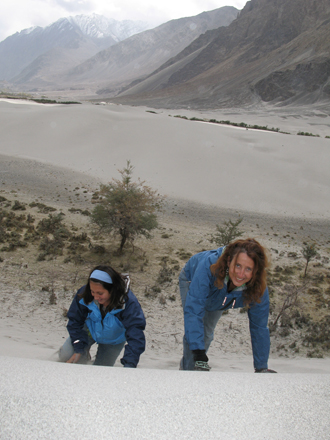 In the end I went on a camel by myself. These camels were different than the one in Aladdin and the ones in pics. They were two humped, furry camels that were way cuter. Afterwards we went to a different monastery with a huge uncompleted sitting Buddha on a building (WAIT! WAIT! I forgot to tell you! On these three days Tony and Thomas have given me the elixir of life….KIT KAT CHOCOLATE!) Anyways, back to the monastery. There were the usual temple rooms and stuff. I got some good monk karma by hauling the biggest bucket of water up three flights of stairs. They also had these Buddhas where they covered their faces with a cloth and removed it only when a certain festival came around. These are called Protector Deities. They seem to use a lot of turquoise stones in the temples. They put them on the foreheads of big statues. I got to see this ceremony where they banged on drums, clanged cymbals and chanted. It was a great experience, plus only I saw it- Ha! Ha! Tony and Thomas were great companions to travel with. They really amused me! 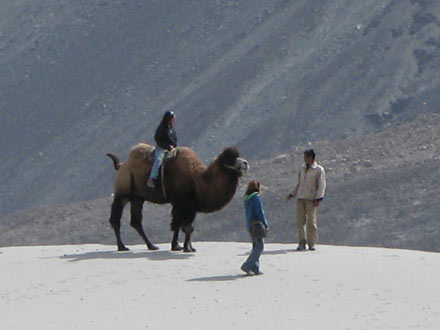 One response to “Nubra Valley Through Bella’s Eyes”