It’s been three weeks since we left Mumbai. There has been a lot to process since then.

We have had many people ask us questions about the event, so we decided to answer them here on the blog. 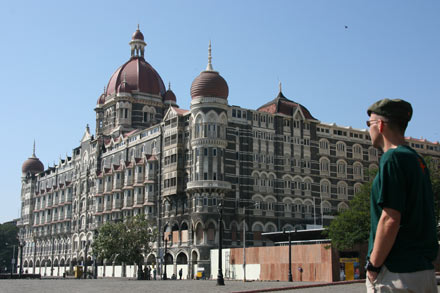 The Taj Mahal Hotel shortly after the terror attack

How are you both doing now?

If you had asked us this immediately following the attack, our answer would have been that we were both fine, but that answer wouldn’t have been totally true.

On our first day out in the streets of Mumbai after the siege, a truck drove over a loose manhole cover making an extremely loud banging sound. Thomas and I found ourselves dropping to the ground out of reflex. We laughed in embarrassment as we both stood back up straight, but the implications of our reaction were rather disturbing. Such gut-level reflex responses to loud sounds are still happening, although less frequently. The Indian habit of setting off firecrackers, which sound a lot like machine gun fire, is seriously not helping us. 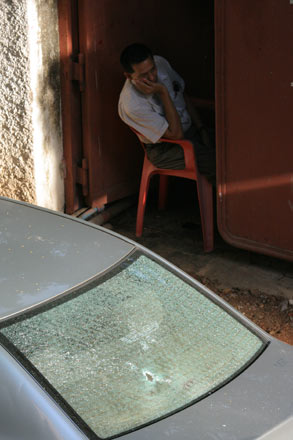 For several days after the attack, we caught ourselves walking up against buildings under ledges. We felt very vulnerable being out in the open. In addition, when we entered buildings, we both subconsciously started mapping out escape routes. Clearly, vulnerability was a common emotion. Even after McDonald’s reopened in Colaba, every table visible from the street below remained deserted.

It took days for us to really process the fact that mass murders had occurred on both sides of our hotel. As news coverage shifted to descriptions of how hotel guests had been lined up and shot, we realized that some of the machine gun fire we had heard had been executions. The realization of how many people had been killed was overwhelming and the randomness of their deaths left us questioning “what if?”

What if we had decided to stop for a drink in Leopold’s Cafe? We had just been in there the night before. Instead, we walked along the water front to the Taj Mahal Hotel. We thought about going in, but decided we should put on some nicer clothes. What would have happened if we had gone in? What if we had gone to the pharmacy an hour or two later? We were in there before the attack looking for sunblock; the pharmacist we were talking to was shot and killed. Thomas was supposed to pick up our laundry at 10 PM on the night of the attack, but he was too lazy to walk over there so late. The laundry guy was shot in the arm. 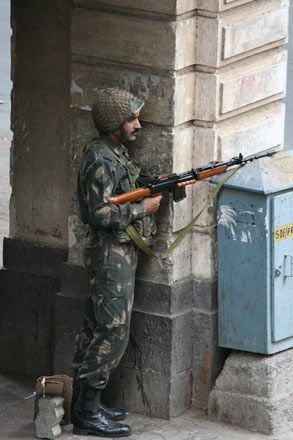 Indian response team outside our hotel

It was quite unsettling, the feeling that we had randomly walked through all these locations, but, somehow, chance had saved us. It left us second guessing absolutely everything we did.

The weirdest thing is that both of us felt the need to stay in Mumbai. Neither one of us wanted to leave immediately. We walked through the streets and stared at the locations. Other dazed tourists and locals wandered around contemplating the attack. As the area opened up, masses of curious Indian and foreign disaster tourists began to gather around the attack scenes photographing nothing with their digital cameras and cellphones. Colaba was hemorrhaging reporters pumped up on adrenaline, rushing around writing about what had already finished. The whole scene was very surreal.

I think the decision to stay in Mumbai for a few extra days was a good one. Watching the city return to normalcy helped us clear our minds and regain a sense of normalcy ourselves. I wonder if all the tourists who fled the city immediately might not end up more traumatized than those who experienced the whole process beginning to end. 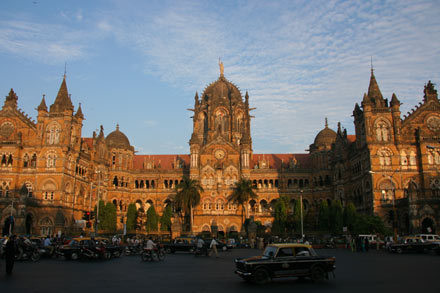 Would you go back to Mumbai?

Absolutely. Mumbai is a beautiful colonial-era city which lives up to the image far better than Hong Kong, Shanghai, or Singapore. You expect to see Rudyard Kipling walking down the street. Or, perhaps, Agatha Christie penning her latest mystery in a shady cafe. The colonial core is enormous, and the monumental Raj-era architecture make the city exceptionally unique. If that’s not enough, the waterfront drive lined with art-deco architecture will win you over.

Moreover, Mumbai is incredibly dynamic. It’s New York and Hollywood rolled into one. The city is glamorous and trendy, while retaining a sense of authenticity. That’s not easy.

It’s really the only city I’ve seen in India where I could actually imagine myself living.

Why did we stay in our hotel so long? Wouldn’t it have been better to move?

We’ve had this question repeatedly. I thought that I had explained this in the posting, but now that I look back it really wasn’t so clear.

Thomas and I were running low on cash when the attacks started. For some odd reason, the authorities shut down the ATMs in Colaba, so we couldn’t get enough cash to pay our hotel bill or hire a car to drive us out of the city.

We contemplated packing up and simply walking out of the hotel without paying, but we knew that if we did that, they wouldn’t let us back in. With rumors circulating that hotels were turning away foreigners, we were afraid to be stuck on the street unable to leave the city. 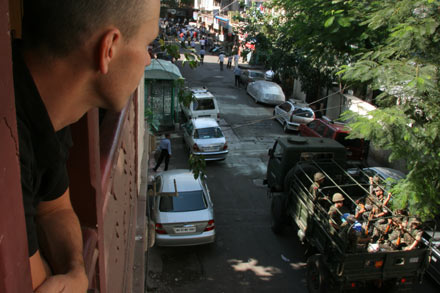 Do you feel safe in India? Are you going to stay?

There is definite tension here after the attacks, and I can’t say that we feel 100 percent safe. India is experiencing the post attack confusion and well-founded paranoia that America experienced after 9/11. It is often difficult to separate solid information from rumor. With India and Pakistan at each other’s throats, the situation is unclear.

So for this reason, we are taking it day by day. In the second week of January, we will be flying to Sri Lanka for a month. This was planned into our schedule to allow us to get another Indian visa, but we will keep an eye on what’s going on and decide later whether or not to come back.

From your perspective, was the Indian response to the attack adequate?

To hear more on this, view Tony’s interview with Fox News New York below:

If you have not done so, please read the original posting Attack in Mumbai.