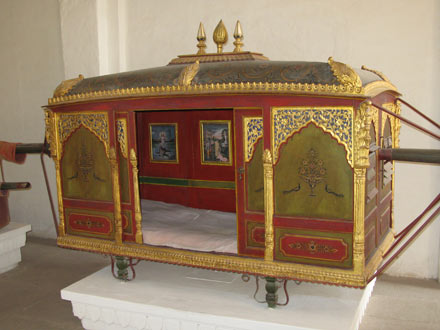 Interestingly, in a country that produces one suggestive Bollywood movie after another, men and women don’t mingle much at all. I imagine this being a remnant of the purdah custom in which women were kept in seclusion, shielded from the eyes of men. To many of us this seems ridiculous. But just how seriously this was taken by the royal family is described in this anecdote we came across while visiting the fort in Jodhpur.

When the present maharaja’s grandmother visited London in 1925, she traveled in a palanquin, a box-like enclosure on poles that was carried by four men. There was to be a strict observance of purdah during the Rajput queen’s first visit to England. Clearly, this caused a wave of curiosity among the London press, and the paparazzi were ready to strike. When the maharani stepped out of the car into her palanquin, the press only managed to get a photo of her ankle. The Jodhpur royal party was outraged and bought up every newspaper before Londoners could get a glimpse of the royal body part.

Man, those must have been some heinous ankles to make it worth buying up every paper!