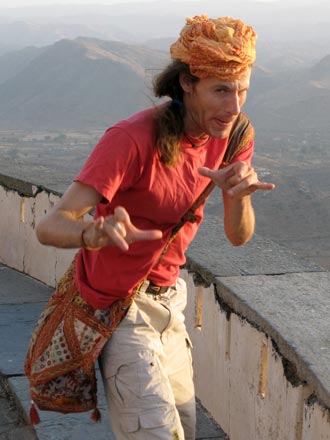 There were few tourists in Khuri. Alex was one of them. When we first met him outside of Badal House, he was wearing a baseball cap with a smiley face and the slogan “Heute schon gelacht?” (German for “Have you already had a laugh today?”).

Tony and I thought he had a distinct French accent but soon found out he was from Israel, born to Ukrainian immigrant parents. French, though, is his passion, and when he started speaking it and waving his arms around like a mad French man, he became a different person. Suddenly, he sounded like a 70-year-old cigar-smoking French film maker. I was impressed. But Tony who speaks French quite well (unlike me) was not fooled. He just stood there with a drooping lower lip and blinking rapidly, “This isn’t French.” And he was right – it wasn’t. It was Gibberish, French Gibberish to be exact, part of Alex’s repertoire he uses in his Gibberish workshops.

The same night, we were sitting on the front porch of our guest house, Alex walked by amidst a group of Korean tourists. It was clear, they had problems communicating with each other in English when, in a last attempt, we heard Alex saying, “We can all speak Gibberish!” A murmur went through the crowd, “Aah, Gi-bi-ris.” They must all have had a good time as we didn’t hear them come back before we turned in a couple of hours later.

Alex is quite a character. A few adjectives to describe him are funny, creative, interesting, interested, open, and spontaneous. Out of his 3-week trip to India, we spent 8 days with and around him and learnt quite a few new things. I had no idea there were Gibberish workshops. What for? I tried speaking Hebrew Gibberish but it made me all nervous and verklemmt (at least I know a little Yiddish). When I attempted to distinguish Dutch from Arabic or Hebrew Gibberish, they sounded all the same, the common denominator being a throaty gurgle. I just don’t have an ear for it. But I think this is exactly the point, to get over your inhibition and listen differently to how people speak. Try it yourself. Imitate a language without using the actual words. Are you afraid you’re making a fool of yourself ? Well, you probably are.

What makes me really uncomfortable is the thought of laughter yoga. Another thing I didn’t know existed. I think this is Alex’s real passion – being a laughter yoga instructor. Did you know there are more than 5,000 laughter clubs worldwide where you can practice laughter yoga and meditation? I love yoga for the stretching and strengthening; I’m not too keen on the breathing exercises and the Oms, let alone the laughter. But laughing is a stress buster. The goal of these tension-releasing exercises is to turn simulated laughter in unison into real laughter. Apparently, the hormones and chemicals released in the body as a consequence are beneficial for your general well-being. I can see that. Again this is to open up and let go of your old inhibitions – it’s about you and not about how other people view you (at least in theory). 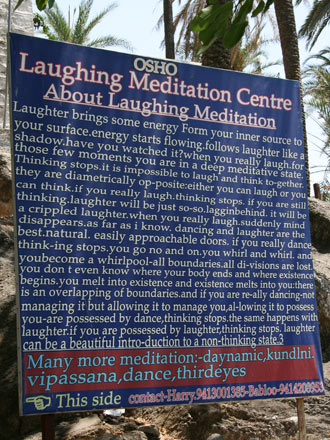 The thing with laughter yoga is that we are not talking about regular laughter but about lion or monkey laughter (at least in Alex’ yoga classes). I’m sure there are other kinds like the witch cackle or the Hyena howl. I personally advocate the Alex laughter – a loud and infectious, medium to high-pitch wail. If you want to experience Alex, you can see him in Jerusalem where he regularly gives Gibberish and laughter yoga workshops. You might also run into him at a new-age conference in California or at a peace gathering in the Jordanian desert. Wherever he may be, I strongly recommend, go see Alex laugh.

Visit his website at www.laughter.co.il. Although it is in Hebrew, you’ll enjoy seeing Alex in action.