The phenomenal rice terraces of Long Ji are a hikers paradise. We opted to hike over the top of the Dragon’s Backbone to the village of Ping An. The trail wove its way through rice paddies, bamboo-filled ravines, pine forests, and remote Yao and Zhuang tribal villages. Spectacular! 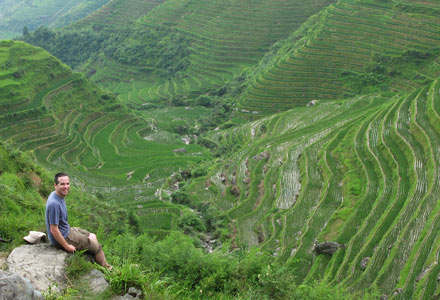 At one point, just as I thought we were about to lose the trail, we came across a Yao man who had just finished whittling a branch into a fork shape. Convinced that he was hunting for the frogs or crabs which live in the rice paddies, I asked him what he was up to. Distraught and speaking very choppy Mandarin, he explained that he was using the branch-fork to brush aside the rice plants to find something he had lost. After a very prolonged attempt to find out what had been lost, we discovered that the man was looking for his cellphone. It turns out that he had been working in the rice paddies and his cellphone had fallen out of his pocket. Cellphones – geeze – they’re everywhere!