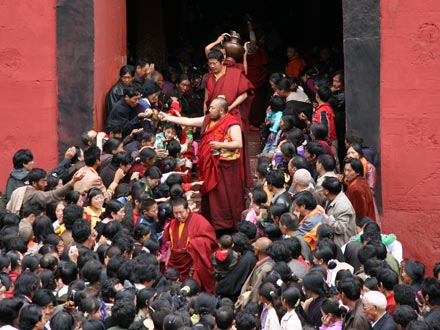 One of the reasons we braved the steep drop-offs of the Chola pass was to visit the famous Bakong scripture printing monastery here in Dege.

Known throughout the Tibetan world for its enormous collection of Tibetan literature contained on over 200,000 printing blocks, the Bakong monastery is thought to contain 70% of the Tibetan literary heritage. This heritage includes all four schools of Tibetan Buddhism as well as the Bon religion.

Our visit to the monastery coincided with the visit of an important lama, which was attracting villagers and nomads from all over Kham (the traditional clothing was awesome to say the least).

On arriving at the printing portion of the monastery, we were quite put off to discover another obscenely high entrance fee. (The entrance fees for Tibetan monuments seem to be even more outrageous than the Chinese monuments.) After much discussion, we decided the fees were meant to discourage visitors, so, defiantly, we bought the tickets and entered. I’m very glad we did.

The monastery’s main prayer hall, which had obviously been extremely neglected, was in the process of being restored (probably for the Olympics); however, the massive collections of printing blocks seemed well protected. 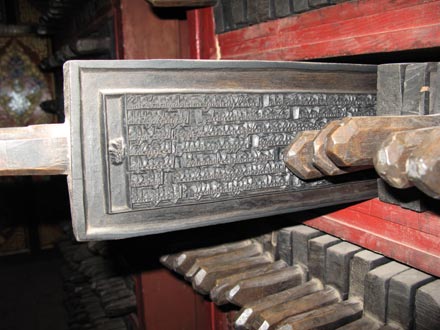 Tibetans were actively working as we led ourselves through the collections as well as the printing workshops. Some were gathering and returning printing blocks, others were grinding ink powder and mixing ink. In the main workshop, men quickly applied ink to the blocks and printed religious texts. It looked liked they were required to produce a certain number of pages per minute because they were working at a ridiculously furious pace. An overseer marched up and down the isles critically eying each of the men.

As the overseer marched by, the men ignored us and pretended to be fully immersed in their work. But every time he turned his back, the men would smile and wave at us and mouth “hello” or “tashi delek” (the greeting in Tibetan.) When the overseer, marched to the opposite side of the room, one man pulled out some printings and offered to sell them to us. Hilarious! 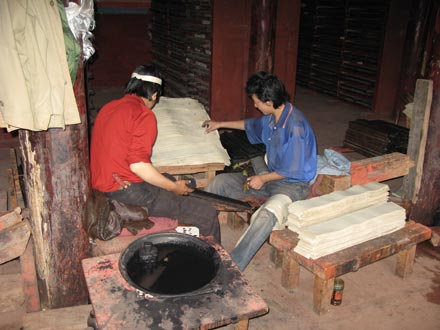 The atmospheric monastery was filled with workers, praying monks, and even a few pilgrims who were praying and making offerings to the collections of printing blocks. The monks and workers were quite nice to us, but everyone seemed like they did not want to be seen interacting with us. People would whisper “hello” here and there, their eyes darting around like they were afraid to be seen. This was quite different from most of the other monasteries we have visited. Clearly, there is a lot going on behind the scenes here. I wish I knew what that was.