Hampi really provided us with a year’s worth of portraits, but now it’s time for a different kind of photo shoot. Having planned this for a year, we are returning to Bandhavgarh National Park in Madhya Pradesh, the top nature reserve to see Bengal tigers. And this time, we are more determined than ever to get a better look and, above all, better photos than last year. 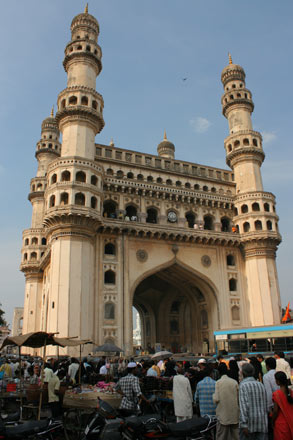 To break up the 32-hour train trip, we are spending a couple of days in Hyderabad, India’s sixth largest city. Probably best known for its computer and Telugu language film industry, Hyderabad’s real attraction is the old center with the 400-year old Charminar, the predominantly Muslim city’s signature landmark. The dramatic structure with its four towers is surrounded by colorful bazaars selling everything from bangles to embroidered fabrics to overpowering perfume oils.

But the oriental fragrances are not the only overwhelming thing. The number of people, especially overzealous touts and aggressive beggars, are insane. Read the next posting to find out how Tony dealt with an especially insistent “little person.”