Watch this short video to see one of the bulls basking in the sun and flipping sand on his back to stay cool.

The California coastline along Highway 1 boasts many natural attractions, above all the amazing animal life. On our trip from Monterey down to San Diego, we spotted sea otters, harbor seals, sea lions, pelicans, cormorants, seagulls, ground squirrels, hummingbirds, and northern elephant seals – just to name a few. “Anything to get excited over?” a Californian might ask. For a local, these are just common animals. But for a German, these are creatures you never get to see outside a zoo – except in California. 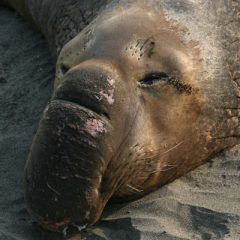 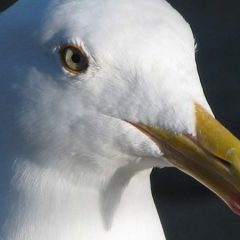 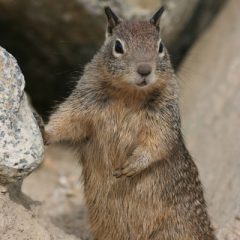 I was thrilled to see the California sea otters and the northern elephant seals in the wild. They are not common in Southern California where I used to live, so this trip up north provided a whole new wildlife experience. The sightings were especially meaningful knowing the animals’ sad history. Both were relentlessly hunted, and by the end of the 19th century, they had almost been wiped out. While the sea otters are still considered an endangered species, the elephant seals are thriving and the population has grown to around 160,000 animals. 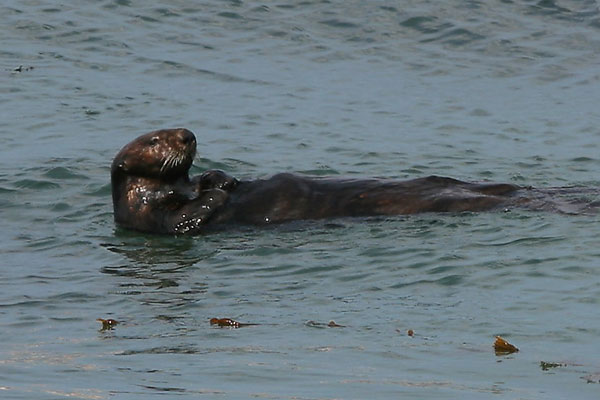 On the way south, we saw a small elephant seal colony right off of Highway 1 north of San Simeon. The bulls, which are much larger than the cows, definitely steal the spotlight. This species’ most distinctive feature is the pendulous, trunk-like nose that hangs down loosely. No secret here where the name elephant seal comes from. A good time to see more active elephant seals, and even witness bull fighting, is during the mating season from December to March.

The winter period is also the perfect time to observe another impressive California marine spectacle – the gray whale migration between Alaska and Baja California. Now that’s the way to spend Christmas!