Arrogant old fogies, Thomas and I, often sit around complaining about how young twenty-somethings no longer know how to travel. These young’uns don’t know how to have a good adventure anymore, we grumble to ourselves. 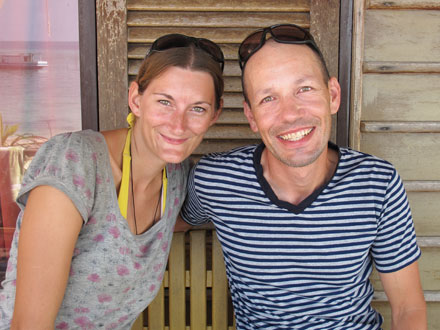 And then suddenly, somewhere around Derawan, along comes Becky to prove us completely wrong. Adventurous souls still exist and Becky is their queen.

About nine months ago, in the 12 Bar Blue in Cairns Australia, British Becky was talking to a friend about nature’s greatest creation, the Great Barrier Reef. When the topic turned to man’s greatest creation, it was decided that that had to be the pyramids at Giza outside Cairo.

Suddenly, Becky, who had perhaps had a little too much to drink, stumbled upon the brilliant idea of traveling from Cairns to Cairo over land and water without taking a single flight. Her friends countered that such a trip was impossible, primarily due to the challenges of getting from Australia to Southeast Asia.

In a mere eight months, Becky has managed to take a very circuitous route from Cairns to Kalimantan. She crewed on an American sailboat via New Guinea, Yap, and Truk to Pulau. (Oh, wreck diving in Truk – I’m literally dying of jealousy.) Of course, that little hop skip and a jump took four months due to boat repairs. They actually sat in a harbor in New Guinea for two months working on the boat.

When the boat captain went a little “Dead Calm” on the crew, Becky jumped ship in Pulau where she worked at a dive shop for a month. Did I forget to mention that our little 26-year-old is a dive instructor who has logged over 1000 dives? Geez, these overachievers.

Becky crewed on another boat to the Philippines where she worked her way by ferry to Mindanao. (Oh Becky, seriously? Mindanao? My god, are you trying to get decapitated by Abu Sayyaf?) Apparently, a gun totin’, bad-ass Filipina escorted Becky through Zamboanga until she got on the ferry headed to the Malaysian state of Sabah on Borneo. From there she worked her way south to Kalimantan, where we met her. Thank god, someone has to take care of this girl 😉

Becky has overcome the biggest obstacle and is within a stone’s throw of peninsular Malaysia. It’s mostly down hill from there. Well, except that she still needs to travel a third of the way around the planet. That shouldn’t be a problem, after a serious chunk of time in Africa and Australia, Becky instincts are very well honed.

So Thomas and I officially admit we are wrong. There are still some very real travelers out there. Good luck Becky, we just might be waiting for you in Cairo. 🙂

One response to “Becky’s Great Adventure”