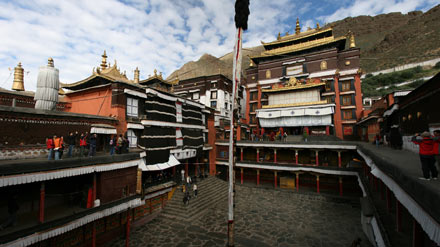 Xigatse, the second biggest city in Tibet, resembles Lhasa in many ways.

Most importantly it is the location of the Tashilunpo Monastery, traditionally home to the Panchen Lama. The massive monastery is second only to the Potala in gold covered Buddhas, jeweled burial stupas, colorful frescos… art everywhere. It also contains what is supposedly the largest gilded Buddha in the world. I don’t know if it is the biggest, but it was certainly the most awe-inspiring Buddha I have ever seen. (I kept going back to the chapel to look at it again.) Once more, no pictures of the interior due to the most extortionate photo permits known to mankind.

Not surprisingly, there were not nearly as many pilgrims at Tashilunpo as in other major monasteries. Certainly, its importance as a pilgrimage site has declined since the Chinese abducted the real Panchen Lama in 1995 and replaced him with their pro-Chinese puppet, who is now in his late teens (a much despised individual.) 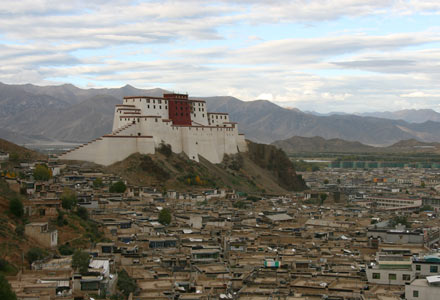 Like Lhasa, Xigatse’s Tibetan core is an interesting mix of narrow alley ways leading up to the massive dzong, the fortress presiding over the city. Although the dzong is a monumental construction superficially resembling the Potala, the structure seen today was destroyed in the Chinese invasion of Tibet. The rebuilt dzong was only completed last year thus the rather too-perfect appearance that, on closer inspection, gives it a strange office-building like feeling. Perhaps, with age, it will blend better into the Tibetan quarter.

Unfortunately, again like Lhasa, Xigatse’s old quarter has been surrounded by the usual cement nightmare, which seems to be devouring up everything beautiful in the “new China.” Despite the surrounding city, I loved our visit to Xigatse and would love to come back and spend more time exploring the town. (I would also love to go back and see that incredible Buddha again.)