I know what you’re all thinking: Another picture of a stupa? 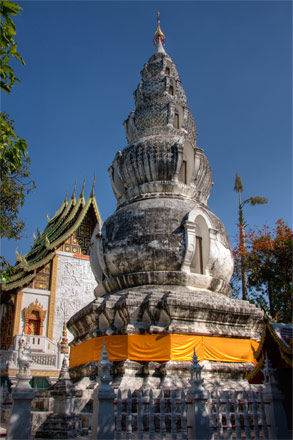 Yes, but this one’s for the architecture freaks out there (including myself). I love my exotic buildings, so when I caught a glimpse of my first real example of a Thai Lü inspired stupa, I insisted it go on the blog.

Such temples are more commonly found around Xixuangbanna in southern Yunnan. But for those who don’t have time for the epic trip across mountainous Laos to southern China, this little gem is a great introduction to a little known culture.

Wat Ku Tao, which roughly translates as “the temple with the watermelon stupa,” is a great example of the very unique stacked-sphere design used around Xixuangbanna. Apparently, Thai traders thought the style was fun, so they decided Chiang Mai needed one – with an appropriately comical name, of course.

In a town which boast nearly 300 similarly styled temples, this curvaceous specimen definitely stands out.