Ushuaia: The City at the End of the World 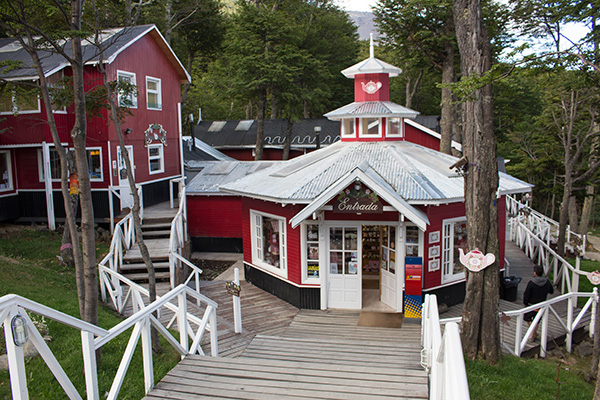 Half the articles out there about Ushuaia reference the “end of the world” or the “fin del mundo.” Yes, the title has become a cliche, but this is precisely Ushuaia’s claim to fame: it is the legendary city at the edge of the earth. In the old days, this is where they used to draw dragons and prophesy that sailors would sail into the abyss. In modern times, we’ve toned down the rhetoric and refer to Ushuaia as the “southernmost city in the world.” 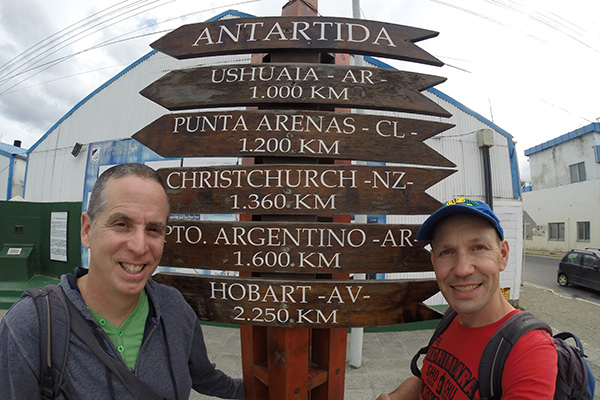 As for many visitors, Ushuaia is our starting point for the ultimate exploration, the holy grail for adventure enthusiasts and travel bloggers everywhere: a trip to Antarctica. But the city at the end of the world, which doubles as the capital of Tierra del Fuego, is a destination in its own right. Backed by snowy peaks in the “heat” of their midsummer season, the city and the surrounding region was tailor-made for hearty explorers. 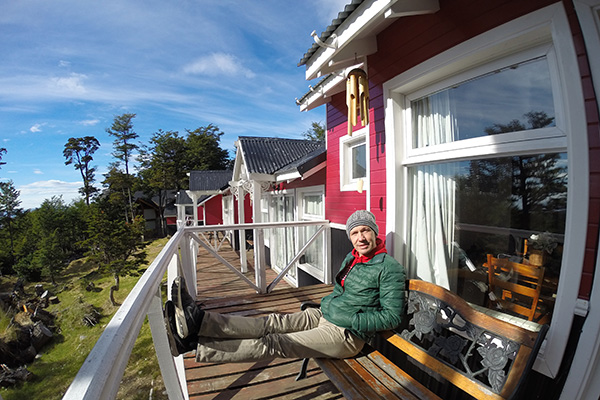 From the windows of our hotel Cumbres del Martial, we look out over a lenga forest at the Beagle Channel and the mountainous islands of Chile beyond. The body of water below us was named after the ship that carried Charles Darwin on his famous voyage around the world. When he sailed the channel, these islands were the domain of the Yaghan tribe, a group of people famous for surviving in this harsh region without wearing any clothing. 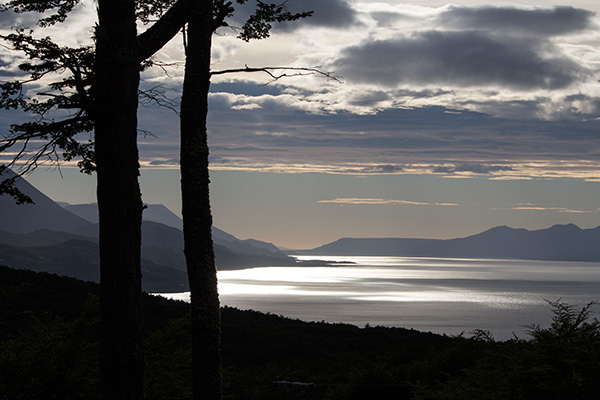 It seems totally incomprehensible to me that people could live here through the cold summers let alone the snowy winters without protective clothing, but there are old faded black and white pictures to prove it. The Yaghan survived for thousands of years by smearing their skin with seal fat and constantly maintaining fires. They even carried fire with them in their canoes as they hunted. Those fires were seen by early explorers who gave the region the name Tierra del Fuego, the land of fires. 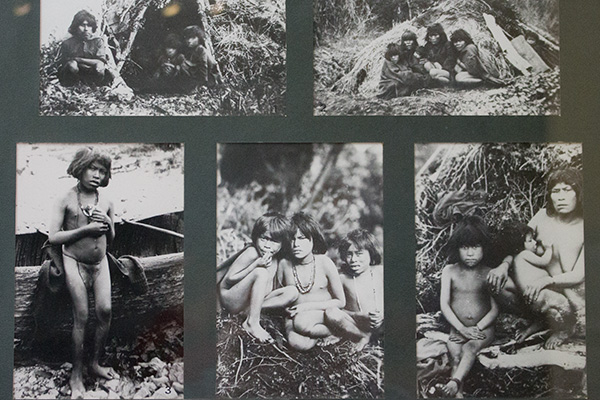 The Yaghan believed that clothing which was constantly damp due to the region’s drizzle and snow was worse than being cold. Apparently, the Selknam people to the north didn’t share that opinion. Unfortunately, missionaries and whalers introduced several diseases which largely wiped out the extraordinary Yaghan. Today, Cristina Calderón, who lives across the channel on Isla Navarino, is the last surviving Yaghan speaker. She is 87. 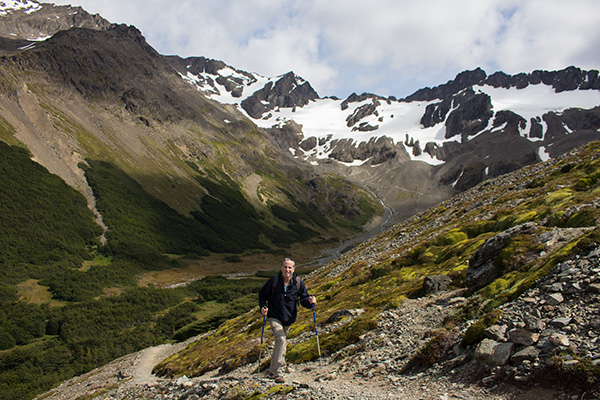 One huge advantage of our beautiful hotel is that it sits right at the start of the trail to Martial Glacier. Thomas and I literally stepped out of our room and began the hike up through the ancient, gnarled lenga forests towards a series of jagged peaks. Because this part of the Andes is so far south, we passed the tree line at just a few hundred meters above sea level. The views down the U-shaped glacial valley overlooking the Beagle Channel were more impressive than the modest glacier. It’s really those views and the natural amphitheater of rocky peaks that bring in most of the hikers.

To be honest, Thomas and I were far more fascinated by the plant life. The slow-growing forests of gnarled trunks and limbs created a fairytale atmosphere heightened by low hanging clouds and mists. The bark on the trees looked like thick, wrinkled animal skin. One photo I took of a knot on a tree could easily be mistaken for an elephant’s eye! 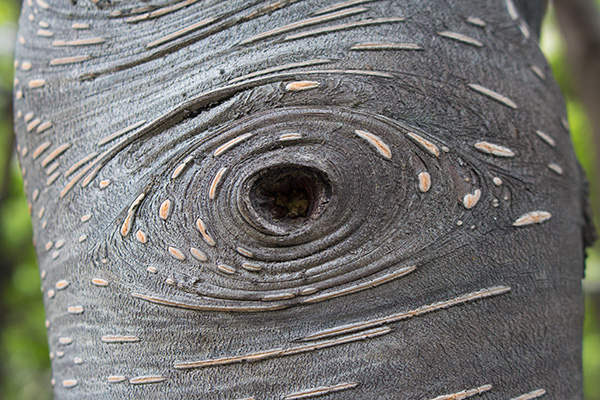 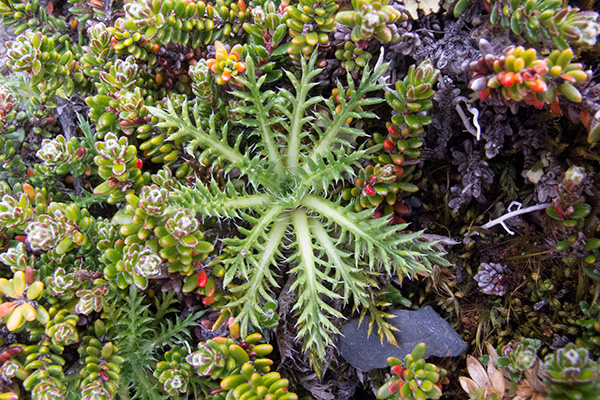 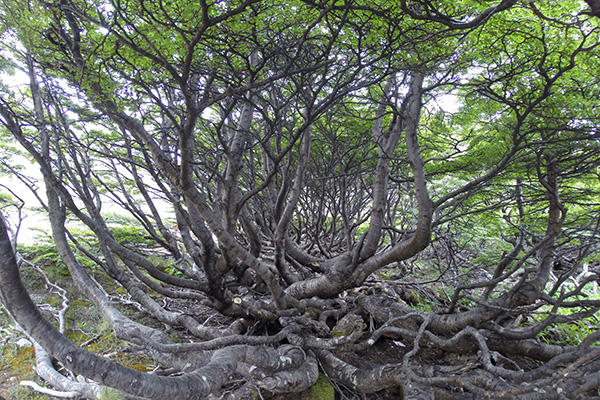 Beyond the forests, a thick carpet of normally high-altitude plants formed a surreal macro-jungle that swept up towards the slopes. The closer we looked, the more color and shape we discovered in the plant life. After a few moments, both of us were down on our knees taking close-up pictures of the spectacular plants much to the confusion of passing hikers who could not figure out why we were off-trail on all fours staring at the ground. 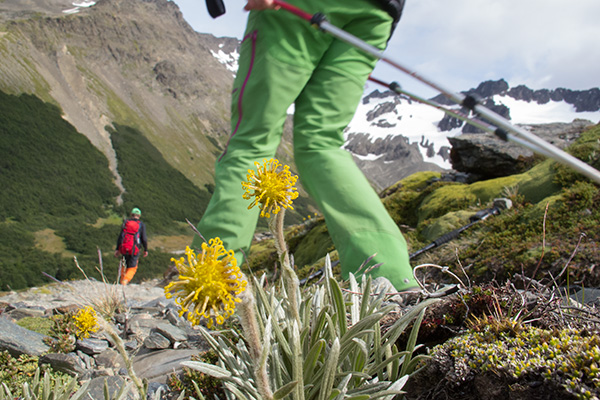 Motivated by the beautiful nature, we decided to hike the seven kilometers from our hotel into town via a series of back country trails we discovered along the road. The paths wound through a fantasy landscape of beautiful forest, over small canyons, along a winding river until we popped out at a gorgeous field of high yellow flowers on the edge of town. If you are one of those people who speeds from Ushuaia to Martial Glacier in a taxi, you are missing some really nice forest walks! 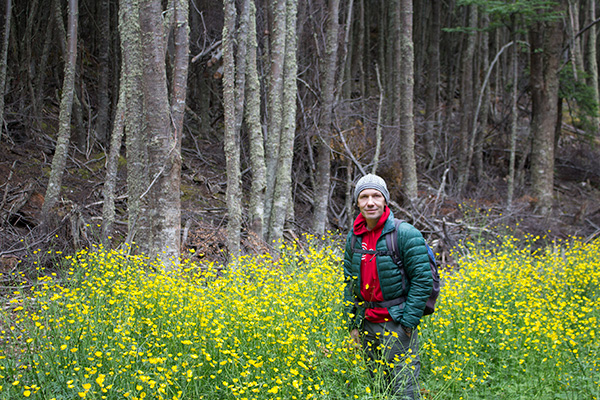 The city of Ushuaia itself often gets more mixed reviews than the nature by people who speed through on their tour of Patagonia. The sprawl is spreading at a geometric rate as the local standard of living is much higher than the Argentinian average. Like Alaska in the U.S., the remote location has created high earnings as well as a high cost of living. That also means that hotel and food costs are quite high. There’s a reason why those travelers are speeding through. To make the situation worse, there are only a few options for exchanging money at blue market rates. 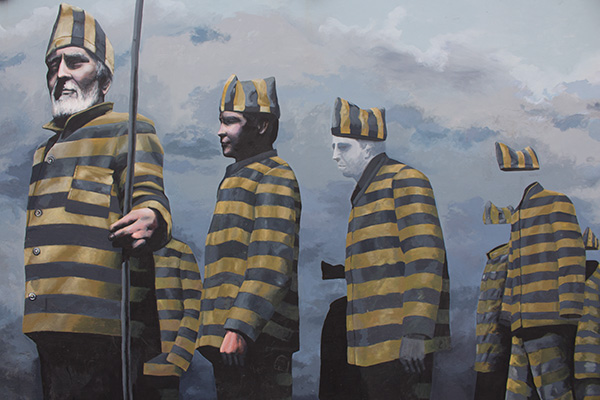 Having said that, we loved walking along the waterfront and bird-watching at the Saint Christopher ship wreck, which is usually swarming with birds. The main port buzzes with activity and each day there was a new collection of passing cruise ships and smaller Antarctic expedition ships. There’s a palpable sense of adventurous anticipation that permeates the town. It’s the closest thing to a frontier port that travelers can find in the 21st century. 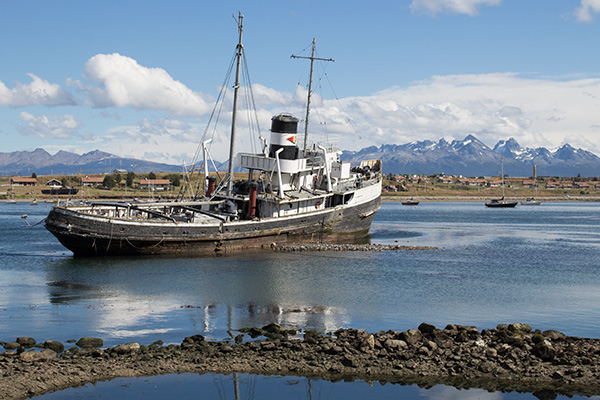 We also enjoyed walking around town and discovering the old traditional wood houses with yards full of blooming flowers. San Martin street, which cuts through the center of Ushuaia, is filled with shops full of overpriced cold weather gear for all those visitors who need to make last minute purchases before their trip to Antarctica. Unfortunately, those shops are closed half the day while Argentinians take their sub-Antarctic siesta (much to the annoyance of visiting tourists wandering around the windy streets wondering why everything is closed.) 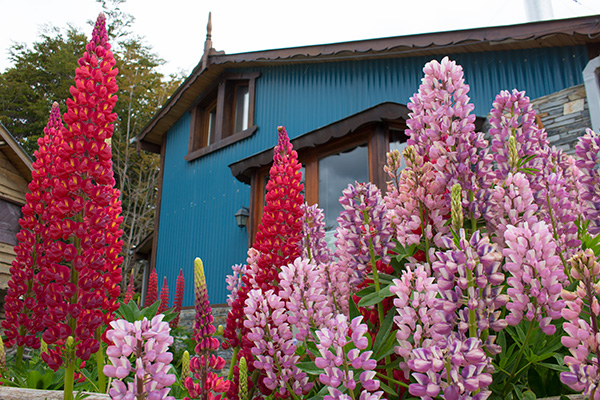 One possible escape from those windy streets is the Museo Marítimo de Ushuaia. From 1884 – 1947 isolated Ushuaia served as a penal colony. The huge prison which then housed the prisoners has now been converted into a sprawling museum which features a seriously eclectic mix of exhibitions including maritime history, the history of Antarctic exploration, Antarctic wildlife, the history of political prisons, and contemporary art. Where else can you see a penguin statue featuring a portrait of Marilyn Monroe and read about Mandela’s imprisonment on Robben Island? We weren’t joking when we said eclectic. 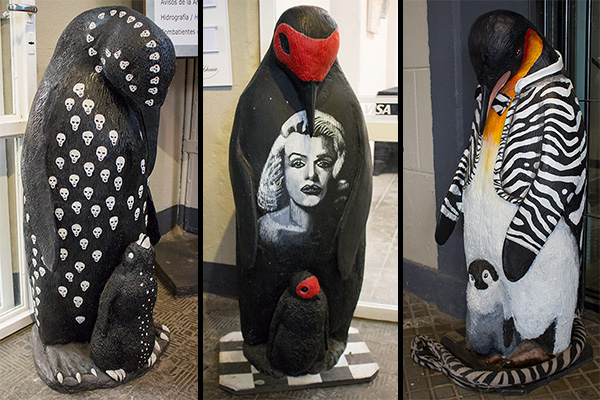 How you react to Ushuaia will directly relate to why you’ve come, your budget, the weather conditions you experience, your expectations, and how many opportunities you have to get out into the surrounding natural attractions. There are plenty of potential excursions including nearby penguin and sea lion colonies, the Tierra del Fuego National Park, sailing on the Beagle Channel, jeep adventures into the surrounding wilderness, and expeditions to remoter locations in the surrounding islands. (We will be doing some of the things after our return from Antarctica, so keep an eye on upcoming posts.) 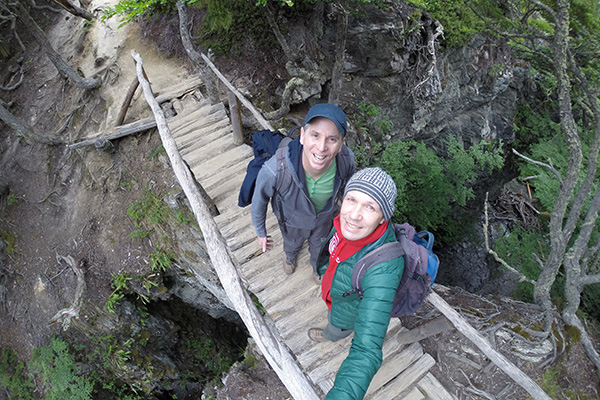 Yes, some people will be thrilled to simply set foot in the world’s southernmost city. That provides a certain sense of geographic achievement. But Ushuaia was made for adventurers and explorers, the more you get out and explore, the more you will enjoy the destination. Extreme nature at the edge of the world was the definite highlight for us. Walking in the footsteps of the Yaghan and Darwin, remembering the waves of explorers and missionaries, contemplating the penal colony, and tiptoeing along the edge of the world through fairytale forests definitely made this a travel high for us. 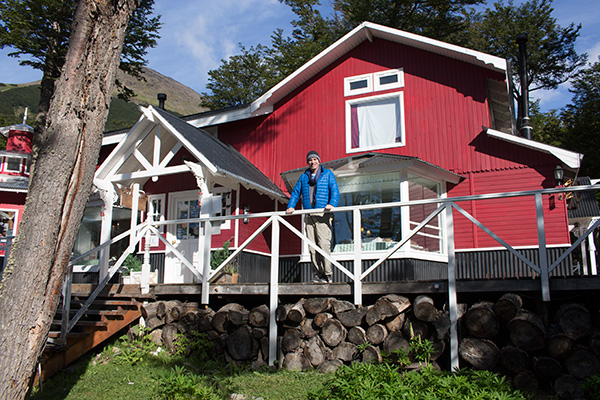 We would like to thank Cumbres del Martial for hosting us in Ushuaia before our trip to Antarctica. The quaint forest lodge and its spectacular location at the Martial Glacier trailhead overlooking the Beagle Channel felt like our home away from home in Ushuaia. The owner Maria, Belen, Antonella and visiting German intern Valerie went out of their way to make us feel welcome from the moment we arrived. 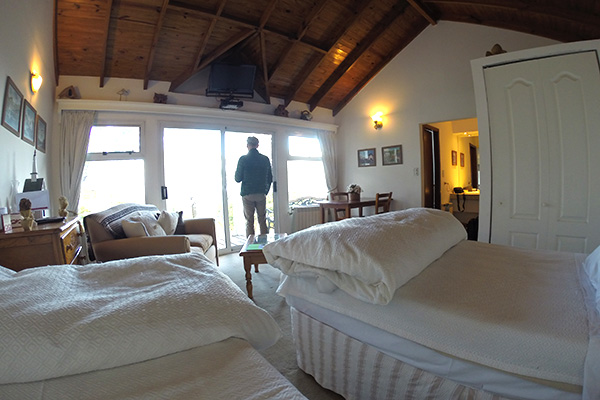 The beautiful red architecture of Cumbres del Martial so came to represent remote Ushuaia for us that we made the unprecedented decision to choose the hotel entrance as our lead picture for the entire Ushuaia post. We loved wandering around the charming grounds and sitting on the rocks next to the Buena Esperanza stream that flows by the hotel. We also really enjoyed that sauna to warm up a bit after our hike to the glacier.

Even if you don’t stay in the hotel, try to stop by at the teahouse for a meal or a hot drink, or at least drop into the gift shop. That will give you a chance to soak up a bit of Maria’s unique forest fairytale vibe and check out the pretty buildings.

If you would like to find out more about Cumbres del Martial’s different rooms, restaurant and tea house, visit them at www.cumbresdelmartial.com.ar. 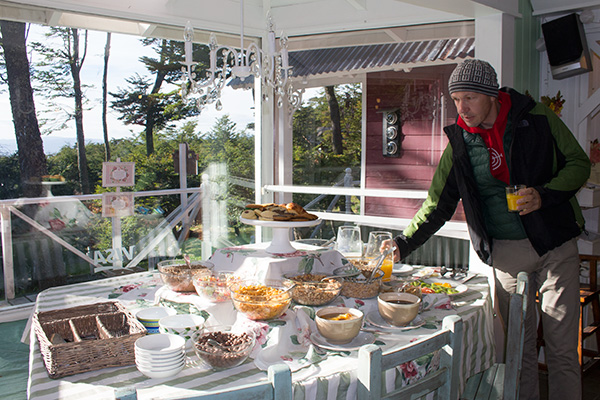 Disclosure: While staying in Ushuaia, we were guests of Cumbres del Martial as well as Museo Marítimo de Ushuaia. However, all of the opinions expressed here are our own.

10 responses to “Ushuaia: The City at the End of the World”